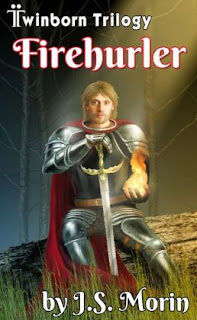 Kyrus Hinterdale has never dreamed. Neither has Brannis Solaran. What they once thought were dreams were really windows into another world. Linked by fate, and a mystical connection that they do not fully understand, each of them watches the events of the other’s life when they close their eyes to sleep. Kyrus’ world is ruled by reason and bustling trade, while Brannis lives in a world of magic and fabulous creatures.

When they cross paths with another pair with knowledge from both worlds, it becomes a battle of wits – each must try to outmaneuver the other, with the fate of kingdoms, and their own lives, at stake.

I have to say that this book really caught me off guard in a good way. This is some serious, classic fantasy. This is sword and sorcery, high fantasy, epic, hard fantasy, you name it. Don't let the size of the book put you off, it is long, yes. However, this is a world that needs some time to be built in the reader's eye and with good reason and fabulous end results.

Kyrus is just an ordinary man making a living at something he's good at. He never suspects that his dreams might actually be real somewhere else.

Brannis is your literal Knight in shining armor kind of guy and even though he's surrounded by magic on a daily basis and should be able to practice it, he simply thinks his dreams are showing him what life could have been like.

There is so much detail I could get into, but I did love this book. Fantasy will always be my first love. But I do have to say this: the book had a bit of a slow start, but it's worth it. It wasn't mind numbingly boring, it just built the details you needed to know through the characters and dialogue. Once things got rolling, very hard to put it down. I know lots of people out there who will look at the cover of a book and might be tempted to bypass this one because of the simplicity, but don't! The intricate tale told within will have you ignoring that in no time.

So, out of 5 skull and crossbones, I rank this: