I read something over the weekend that prompted this post. I have to say, this is something that we, as writers and authors, are constantly having to deal with.

We've all had them, those darn Bad Reviews. I have quite a few on my debut novel, which I honestly expected. But I took those Bad Reviews and used them to help me in my writing. To help hone my craft.

Bad Reviews are going to happen, like breathing, whether we like it or not. They just come naturally because *GASP!* we can't force people to like our stuff.

::Looks around with shifty eyes::

If we forced people, that would be bad and we'd go to jail.

So what CAN you do about a bad review?

Not a damn thing. You can't take it down, you can't react to it, you can't ask the person who left it to remove it. It's like trying to censor their opinion. 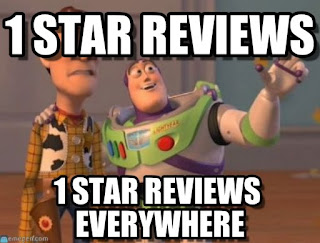 The reviews aren't going to kill you. Well, unless they become solid and land on you... but that'll never happen.

~Make you feel slightly nauseated. (Unless you're actually a pregnant female. Might want to go get that test now.)

~ Make you want to give up writing forever.

But that's okay! Yes, I said that in my most Chipper Voice Ever! And no, I'm not in need of a straight jacket, despite what my family thinks...

A Bad Review should:

~ Motivate you to be a better writer.

~ Point out the weaknesses in your writing that you CAN correct.

~ Make your next book much better than your last.

~ Respond to a Bad Review.

~ Throw a fit, publicly (and by publicly I mean outside your house or on the internet...).

~ Ask the person to remove the review.

The only time you can honestly ask a review to be removed, is if the person is knowingly bashing you and harassing you and you've got proof that they are Out To Get You. I have to admit, I've got my book up on Goodreads and someone actually put on there, "Marked it as Not Going To Read". I think if they could have put, "EVER" on there, they would have. Don't know who the person was or if I ever pissed in their Wheaties, but whatever. What am I going to do? Force them to read it? 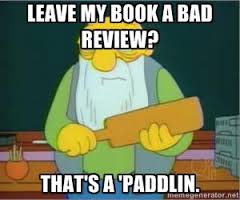 No, that would be BAD.

But seriously. Don't be a troll about your book. Don't be a jerk. Roll with the punches and grow a thicker skin. We've all been there, we've all done that. We'll be doing it again with Every Book We Write. You can't escape the Bad Review, so let them come! Take your time off of work to deal with them. Eat some chocolate, curl up with some tea and a chick flick, and then move on.

It'll be fine and after awhile, you won't even know they exist.

You'll develop blinders for them.

We'll still see them, but for you they will seem to disappear like a fine mist.

Have a good rest of your week!
Posted by Mel Chesley at 5:00 AM

I'm about to release my books again (or the first one again. The second's about to get its first outing), so this is something I'm mentally preparing for.