The Most Stressful Time Of The Year...

I miss all of you, my wonderful blogger pals...

It's my own fault, however. Okay, well, not entirely.

I shall attempt to explain. Hubby and I moved from Alaska to Washington and are currently staying with friends. More like our friend, their parents and daughter. Our friend's father was diagnosed with stage 4 lymphoma prior to our getting here. They're older (I won't divulge age, that's rude) and lots of health issues. Our friend has psoriasis and the arthritis that accompanies it. So while he has done a great job of taking care of his parents, it's affecting his physical health, too.

Okay, so with that being said, "Dad" went into the hospital and we're trying to be optimistic, but it doesn't look good.

Hubby and I have been helping watch the daughter, clean, cook, well... practically anything we can help out with, we do so. We're meant to be here, to help, we know that.

So I have to say, writing and blogging have been put on hold. With the holidays and everything else, it's pretty scattered around here.

After Christmas, I'll be traveling for a week or so to go visit family in Arizona. I was trying to surprise people, but I can't keep stuff like that a secret, so the cat is out of the bag... stuff that furball back in! So I won't be around for awhile after that either. I'm hoping to have my IWSG post scheduled by then. Here's hoping.

On the off chance I don't post anything for a bit, I wish all of you a very Merry Christmas, Happy Hanukkah, Joyful Kwanzaa, Happy Holidays and a Happy New Year! I will definitely see you all in 2014.
Posted by Mel Chesley at 4:30 AM 6 comments: 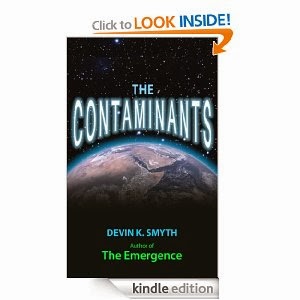 About the book (from Amazon):

When America attempts to "purify" earth to maintain its own dominance, it sparks a worldwide nuclear holocaust. Teen friends Jessil and Soraj are among the few survivors. They escaped on a cruiser that now orbits the planet and is designed to help regenerate the earth's ecosystem. Soraj’s father leads the regeneration process and is hopeful that he can salvage a region in North America for the cruiser’s return.

But when Jessil discovers a message indicating her own father may have survived the holocaust back on earth, she’s determined to rescue him immediately with Soraj's aid. Can they succeed even though the planet they return to is very different from the one they left—and that their success could mean failure for the regeneration process?

I'm not typically a Sci-Fi reader. Don't ask me why, I have no explanation, even though I love Star Wars and other SF movies.

"The Contaminants" by Devin K. Smyth is a really well written book. You get two points of view in this story, one being Jessil's and the other is Soraj's. Each chapter alternates the point of view, so you're getting a complete understanding of just what happened to Earth.

Jessil is simply an All American girl. She lives on the base with her father, brother and adopted brother before the attack. She's athletic and likes to keep busy. She's devastated that their father was left behind and tries to make the most of what is now her life.

Soraj is, to me, a typical teen who wanted the latest technology and sacrifices an eye to have a SOLE implant. I don't remember being told what SOLE stood for, but Devin explains the use of the device well enough, that it doesn't really matter. He's not as active as Jessil, but you can tell he's got a crush.

The two teens are so different, but they have a dynamic friendship, regardless.

So the creatures that now inhabit Earth are pretty amazing. This is, to me, a typical Sci-Fi story. It's believable, there are no questions raised while reading and it's a very engaging story. I highly recommend it, if you are a Sci-Fi fan.

So with all that being said, I give this book

4 out of 5 skull and crossbones.
Posted by Mel Chesley at 4:30 AM No comments:

It's Friday! And we're that much closer to Christmas.

You can throw rotten apples at me later, ha!

Being that it's the holidays, let's focus on some holiday favorites. One thing I absolute must do this time of year is watch "A Christmas Story". It isn't Christmas without it, for me.

Other traditions that have become favorites are taking the left over candy canes and crunching them up into chocolate chip cookie dough and baking cookies.

I like having spiced cider. This year I want to try mulled wine. I also like watching "It's a Wonderful Life". But most of all, it's spending time with my family that makes this my favorite time of the year.

So what traditions do you have that are your favorite?

On to the funnies! 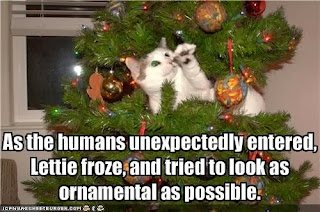 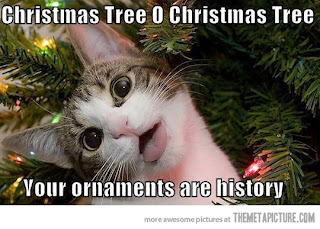 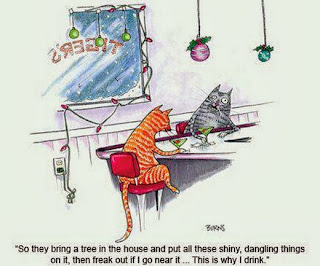 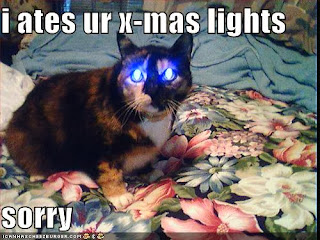 Wow. Last month of the year and last IWSG post for 2013. If you want to know who else is participating visit the Ninja Captain behind it all, Alex J. Cavanaugh.

So I posted a bit of an insecurity yesterday. You can see that post here if you missed it.

For today, I'd like to be a bit more on the advice giving side, than the whiny, oh-my-gah-I'm-a-writing-failure! side. (I'm talking about me, not you.)

I see lots of my friends posting links to new releases. They talk about how this, that and the other thing will be out next month and the following month, there will be more. And don't forget to stay tuned to when you can see this short piece, that short piece AND a bag of chips with it all....

I'm being facetious. And by now, you're asking where is the advice?

Personally, I can't write everyday. My creative process won't allow it. I have to come up with ideas, jot down as much info as I can, and then let it marinate for awhile. Sometimes, I go months without writing a single word, then all of a sudden, I'll write eighty thousand.

Does that mean I'm less dedicated than those people who have a new book out every week?

No. It just means I work differently than everyone else.

Story of my life. I am proud of the fact that my life-long address has been The Island of the Misfit Toys. 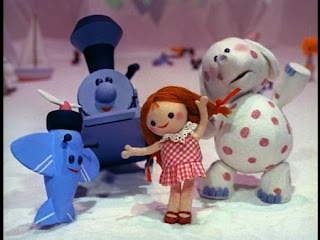 I'll be hopping around and visiting you all today to see what your insecurities are, and/or your advice! Have a great day.
Posted by Mel Chesley at 4:00 AM 7 comments:

Writing has been put on the back burner for me for a bit now. I did work on revisions of book two for a time after the move and it went well.

Meh. I feel like I have writer's block. But we all know what stress can do to you. As much as changes in lifestyle and all those other little bits and pieces that roll into one big ball of "I-don't-wanna!!!".

Funny thing is, I've worked through stress and writer's block before. But it seems like it always changes and becomes just that much harder to write through.

Which forces ME to adapt even more.

So I just continue watching all these new releases come from my writer friends and try not to let it get to me. I mean... I NEED. To. Write.

Seems like my blog theme so far has been: "Whine. Complain. Repeat." Maybe I'll just start posting up some of my flash fiction that I've been doing for writing prompts. I need to do something. You're all bored of my whiney-ness, I can feel it. Ha!

I hope you all had a good Thanksgiving holiday!

And a huge congratulations to all who participated in NaNoWriMo! Like I posted on Twitter, doesn't matter if you reached the 50,000 word mark, the fact that you TRIED is good enough for me.
Posted by Mel Chesley at 2:02 PM 2 comments: