I'm very sad to say that I've had to put down my best furry friend.

This is about the only place I know of, where I can talk about it like I need to. Want to. Have to. He was so much more than just "my pet cat". Some will understand, others won't, but that's okay.

My husband found him when he was a baby. Still had blue eyes. They had a rat eating insulation at his work, so he was instructed to put up a live trap. The first night, he set it up and the next morning came in to find a orange, spitting ball of fur. That was Osiris. The next day, hubs caught his sister. We didn't keep her for very long. That's another story entirely.

But my husband found him shortly before we started dating. So I knew him when he was a little fluff ball, too.

He was 15 years old when we put him down.

He moved everywhere with us. We moved from Arizona to Alaska, we brought him on the plane and the car trip from Anchorage airport to our new home. Then, when we left Alaska, he went with us, too. He and Gir were in the truck with us. Hubs had built them a special box that was behind the cab, extended out to give them a place to sleep as well as kitty box accessible. When we stopped to eat, drink or rest, they ate and drank, too. Osiris didn't like it much, he stayed in back, complaining the whole way, but he was with us. No matter what. Gir loved the trip, though and because she was there, I think it made him more adventurous at times. He didn't want to be shown up by a girl.

Fifteen years. That is a very, very long time. We loved him, we spoiled him. Just like we spoil Gir.

There were so many times I've been sad, depressed, not wanting to get out of bed and face the world, and he was there with me. Curled up against me, letting me cry into his fur and purring the whole time. He never judged. He knew when I was sad, and would just be near me. When I knew he wasn't doing well, when he was sick, I babied him like he was a kid. He couldn't drink water from the tap, it made him sick. So we bought a filter right away. Near the end, he didn't have the energy to eat the dry food, so we fed him canned. He would just meow when he was hungry, follow us to the kitchen and eat.

He was my best, furry friend. I miss him horribly. Our hearts are broken. Our house is too quiet. Gir keeps calling for him and won't leave my side and curls up next to hubs when he's home. We definitely have a hole in our lives that will take a lot of time to heal. Everyone who met him, liked him right away, even fell in love with him right away. So many people. All it took was one pet of that super soft fur.

All you had to do was look at him and he'd purr, even when he was curled up, asleep on the bed. He gave the best hugs and loved to give you his belly to rub.

I'm going to miss him very, very much. 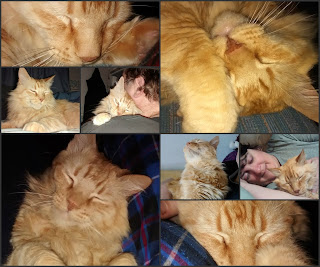