Welcome to another Ladies and Gentlemen of Horror author interview! I'm a little biased about today's author, as I've been working with him on my BREED project as well. Today, I introduce to you, John H. Howard! His answers will be in purple. 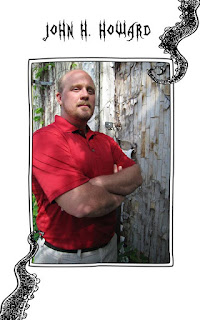 1) Is this your first year participating in the LGoH?

2) If so, tell us what drew you to this anthology.

My mother was a 17-year breast cancer survivor until she finally lost her battle to that beast in September 2016. Because all proceeds are donated to the American Cancer Society, there’s no way I would ever say no to contributing to that cause. Plus, the anthology has gained quite a following and a reputation over the years, so there’s a certain amount of prestige in being asked to contribute.

3) If you’ve written for previous LGoH anthologies, list the story titles and years.

4) What is your preferred genre?

I used to think it was fantasy, but it seems my mind tends to be drawn more toward horror anymore. It’s a great way to explore the human psyche and our collective inner demons.

5) What other titles do you have published?

“Cry of the Banshee” in the Tome of Distant Realms, 2008; “Mrs. Culling’s Reformatorium for Wayward Children” in Isabelle Rose’s Twisted Fairy Tales, 2009; “The Goblin Lantern” and “Obsidian” in Ladies and Gentlemen of Fantasy, 2014; “Moonville” in The Horror Society Presents: Forgotten Places, 2015; “Mrs. Culling’s Reformatorium for Wayward Children” (reprint) in Fiction Foundry Presents: One, 2015; “Effigy” in Ladies and Gentlemen of Horror 2015; and finally, I recently released a novella entitled “Ordinary Heroes,” which is available in print and Kindle formats on Amazon.

6) Where do you get your ideas?

From everyday life, ordinary situations. I think the key to having great story ideas is just to keep an open, active mind. I’m constantly asking myself what would make any given situation more interesting or creepy or horrific, or if I were a character in a story in that moment, what could happen next.

7) Does writing energize or exhaust you?

A good writing session will energize me for hours. A bad one will exhaust me.

8) Do you write for yourself or your audience?

I write for myself, but edit for an audience.

9) What other authors are you friends with and how do they help you become a better writer?

Jennifer L. Miller, who was the first person to publish one of my stories back in 2008 (“Cry of the Banshee”). She has been a constant source of encouragement through the years and every time she asks me to contribute to something, I try to make each story better than the last.

Julia Press Simmons, one of the most badass self-made women you’ll ever meet. Not only is she an author, but she’s currently in the process of building her own multimedia pop culture empire. If not for her, “Ordinary Heroes” wouldn’t exist in its current form. I had originally drafted it as a short story for submission to a super hero-themed anthology and she asked me why I was wasting my time submitting to anthologies like that when she felt I could do well self-publishing. She told me to add 10,000 words to the story and that she would help me put it out there. I did and she did. I’m very grateful for her time, advice, and mentorship.

Also, there’s the Fiction Foundry Freaky Fridays peer review group: Jennifer Caress, Carolyn Kay, Klara Gomez, Robbie Knight, and Sarah Walker. We’ve been critiquing each others’ work for more than two years now and do our best to strengthen each others’ writing. It’s great because everyone brings something different to the table. I have learned and grown so much over that time period, I don’t even think I’m the same writer I was two years ago.

10) What was the hardest scene to write?

Not so much a scene, but an entire story: “Effigy,” which appeared in LGoH 2015. In it, a young woman awakens tied naked to a tree with no memory of how she got there or even who she is. Throughout the story, other people do horrible things to her. I almost didn’t submit it because it was so rough (and I was slightly worried about being labeled a misogynist), but I tentatively sent it to Jenna Miller. She loved it and printed it. It got a really nice review on Amazon, too. Now, it’s one of the stories I’m most proud of because it pushed a lot of boundaries, both as a story and also for me as a writer.

11) Do you Google yourself?

I did once and learned that the former Prime Minister of Australia had the same name as me. But otherwise, no.

12) Do you hide any secrets in your books that only a few people will find?

In my fantasy stories I almost always reference wights of some kind, usually mist wights, but you’ll also see fire wights, water wights, and occasionally the elusive shadow wight. In my fiction, they’re not so much spirits or ghosts, but closer to elementals. It’s something I came up with way back in my twenties and I liked the idea, so I’ve tried to continue it.

13) Do you have any little known facts you’d care to reveal to us now?

I hate coconut, but I love German chocolate cake. Weird, I know.

Thank you so much for participating, John! And congratulations on getting "Ordinary Heroes" out there! Have a great rest of your week, everyone!

Find links below to connect with John H. Howard:

Amazon Author Page
Posted by Mel Chesley at 5:30 AM