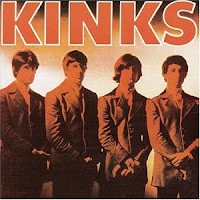 Kids. I have two. Six if you count my kitties. They're a handful, I tell ya. Sometimes they are getting into trouble, just like kids. I was going to post about one of them on G day since her name is Gir. (Grrr) That wouldn't have been fair to the other kitties, though.

So here, I will share with you some pics and info about each "kid".

Colby goes first, she's the oldest. My mom sort of pawned her off on my because she's getting older. (The cat, not my mom) My mom wanted to travel more, not have to be burdened by a pet. So Colby entered our lives. Which was fine. She fits in as the Alpha Kitty of the group. Then my mom went and got another cat, because she got lonely. I don't blame her. My kitties are great company when no one else is around. I don't know if I have a good pic of Colby, let's see...

Then there is Osiris. Yeah, I love explaining his name to the Vet. 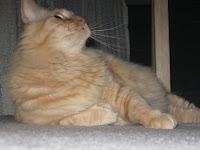 "Osiris? What kind of name is that?"

"It's the Egyptian god of the Dead."

"Oh." Silence. "Current on his shots?"
Yeah, I love to tell people that one. He is a golden god kitty, lol! He's part Manx, part Maine Coon. Fluffy as all get out with his short, crooked tail. My husband found him when they were trying to catch a rat that kept eating the insulation. Live trap, obviously. The first day he caught Osiris's sister, Squeaker. Then Osiris himself. Squeaker squeaked when she purred, it was really cute. But then she fell into a bad habit of not using the kitty box and well... we had to give her up for adoption.
When I move 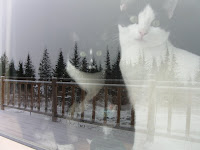 d to Alaska, we just had two cats. Three if you count my brother in law's, but she was outside most of the time. I can barely pronounce her name, but I think it is spelled Feducious. Please don't ask for the long version, I really cannot pronounce that one. Hehe!

One year, we were expecting my son to come up from Arizona. (He lives with his dad.) Christmas visit and all that. His flight got snowed in at the Seattle airport and they canceled, saying no unaccompanied minors were allowed to fly. We were so depressed. We went to the grocery store to do some last minute shopping for our Christmas dinner. We were not a cheery bunch. I looked around for my daughter, but she'd went off on her own. I was down at the other end of the store when my husband came up to me and said, "She found a kitten. There's a guy outside with kittens."

"Well, we did promise her a kitten one day. What do they look like?"

"Well you have to come see them. They're cute!"
Of course they're cute, they're baby kitties. So I went out and lo and behold, one was curled up in my daughter's jacket sound asleep. Another mother was there with her kid and the guy asked which one she wanted. The kid pointed to the one in my daughter's arms. Right then, my daughter looked up with a pained expression, saw me and almost cried.

"I think she wants that one," the guy told the kid. The kid pouted but the mother saw my daughter's look. "Let her have that one if she wants," the mother said. They all looked at me then and I sighed. "We'll take that one."
I'm such a sucker.

So we get home and there is a note on the front door. See, my brother in law thought we would be on our way to pick up my son at the airport. He had no idea yet that the flight was canceled. The note read: "Family, kitten in house. Just look for Osiris."

He picked up our kitty's litter mate from the same guy outside the store. We just missed him. So now we had 4 (5) cats. Thus Oona and Gir came into our family. At first, we thought Gir was a boy, because the guy said so and we looked up her little kitty skirt just once, mind you. We couldn't tell, so we let it be and took the guy's word. So when we went to get them fixed, imagine our surprise when Gir was a girl. Hehe! So from that day on, I tell her she puts the Grr in Girl, baby.

I know, long post for a Tuesday, but I hope you enjoyed it. I love my furry kids. They're cool! 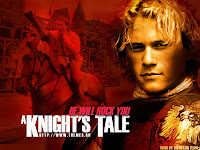 That's such a cute story about the kitties. Too bad your son couldn't make it though, but it seems like the kitties were a consolation.

Loved the story, reconised the photo of the Kinks took me back to my younger days.
Take care.

Osiris is GORGEOUS! I work at an animal shelter, and my favorite part of the job is letting the little fluffies run around together and play.

Hahaha I have three cats and I call them my kids too! I love that one of your kitties is named after Gir from Invader Zim!!

I just love that your cats have such personality lol. But then that's because I miss mine.

That was a lovely kitty post! I thoroughly enjoyed it!

Yay! B. Miller you should get a prize for knowing Gir was from Invader Zim. lol! Our vet thought it was great because they had a dog that came in named Invader Zim. We rounded it out well for them.

Oh and Gir is the black one with white markings, Oona is the white with black markings. I'll put up separate pics later. Gir has the cutest markings on her face.

Yes, the kitties were a consolation for my son not coming up. I'm just glad he will be here in a few weeks for summer break. :D

Sweet post; I wish I had a cat! Our
beagle is crazy, don't think it would work out well! Gorgeous pics!

I love cats, but we don't have one now.
So I'll just have make do with great stories like the one you have just told.