I have been wanting to share what I got from Amazon.com. See... Talli had a contest a while back and I won. (First contest ever, mind you!) So I chose the Amazon gift certificate. Wanna see what it helped me get? 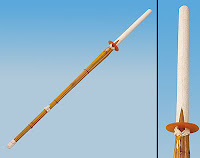 Shinai! ::Swoons:: They are Martial Arts practice swords made of bamboo. Now I know you are asking, "What in the world did she buy those for????"

A very good question! See, I've mentioned before that I am a member of the SCA (Society for Creative Anachronism). If you don't know what that means, I will tell you. I'm a member of a very large, very diverse group of people. The SCA is a historical re-enactment group. We portray pre-17th Century Europe. Each area of the country is broken down into "kingdoms" and from there, broken down into Shires and Baronies.

Now this isn't some cute little Renaissance Festival group we're talking about here, folks. As a matter of fact, Renn Fairies don't like to be associated with us and vice-versa. (Hence the Renn Fairies comment. Hehe.) Why? We're more period for one and we don't act out our fighting.

See, when you fight in full armor (yes I said Full Armor) you can't very well choreograph the fighting without it looking like you are letting the other guy win. Okay, maybe you can, but where is the fun in acting it out? Well, to each their own. However, in the SCA you actually have to choose your persona.

What do I mean by persona? You get the opportunity to portray someone in a specific time era. There are limits. Can't go into the 17th century and you can't go back farther than a specific time. I forget, its been awhile! Anyway, your name has to be researched. As does your device. Your Device is basically your Coat of Arms. I get grief all the time with my pirate persona. Not because she is a pirate, but because tri-corner hats didn't appear until the 17th Century. So I have to fix it. Ah well.

So do you see what I have said about researching your persona? You have to come up with something that could pass for the time period you are representing. You also have to come up with a back story. You have to research and ::gasp:: learn some history! Sorry. Hehe. I get a little defensive because people tease me about being a Renn Fairie and I'm not. I don't get paid to act a part, I chose this hobby.

So anyway, when you fight, you fight in armor with a very large stick of bamboo the size of a baseball bat. People still get hurt, which is why they have waivers at every war. Yep. War. When you practice, though, you don't have to be in full armor and can use the light armor and Shinai. My husband and I fight with the Shinai. He used to fight full armor and I didn't make it all the way to full armor and can't now, because of my hands. So I stick with the Shinai and Rapier fighting.

So my persona is Captain Sorcha (Sore sha) MacGregor of the Blue Drake (my ship!!!). My device is divided in half. Up on top, I have two Celtic crosses in silver on a blue background and below I have a red dragon, rampant I believe, on a gold background. Which, you can't use just any color, mind you. You have to use colors they could have made back in the day. My back story is that I was around at the time the Templar Knights were being killed. I was captured with another group, going to be hanged and was actually innocent of any crime. So I escaped, boarded a ship and decided if they were going to try to kill me I might as well do something to deserve it.

You learn so much in the SCA. At War, you actually get to take classes on how to make all sorts of things. People build trebuchets and catapults for contests. Archery is part of the fighting as well. Arrows have tennis balls on the end. Hehe! What is even more impressive. This group is watched by the Government. We're all trained (most of us anyway) in hand to hand combat and very well could act as a last line of defense if called upon. So I bought me some Shinai. It has been awhile since hubby and I have fought and we're looking forward to getting back in fighting shape! So, Talli, thanks for holding that contest!! I'm so glad I won. I would have gotten them at some point, but since I won the contest, I figured I should get something fun and not be so practical about it. :D

Have a good week everyone!
Posted by Mel Chesley at 2:37 PM

Wow, that's all really interesting. Your last bit, about your kind of groups being the last line of defense, well, heck, that is a muse if I ever saw one! What an awesome story that would be.

Sounds like fun and maybe not so much fun when you get hurt. :) Sometimes it's nice to throw practicality to the wind and just do something that you wanna do! Good choice!

Oh but the bruises are well earned! :D

Interesting! Does it take long to learn the art?

No, not really. You learn quickly how to avoid getting bruises. That's for sure! There are certain moves you should know and practice, then work on where to use those moves when fighting, where to find the holes in the defense of your opponent. It's grand!