Working Out the Kinks... 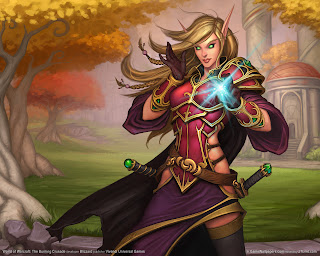 It seems my creativity has ebbed over the past several months and there hasn't been much I have done about it. Picking up a book is a good sign that some of it is coming back. It means that I may actually have my stuff together enough to get back to writing, use it as my tool for escape rather than hiding out in the World of Warcraft. Hehe.

Role playing games, online games... they're all well and good for a distraction, but more often than not, they were my hideout. The online, text-based role playing game was THE BEST for sparking my imagination by far. The fact that the screen rolled with text and you had to write out most of what your characters were doing helped keep that creativity flowing. If you were not going to be on for any length of time, months would pass in the game, so you ended up leaving short stories in the forums to explain absences.

Sadly, playing a game like World of Warcraft doesn't spark or trigger the imagination quite like that other game did. So when I sink into it and pull the blanket over my head, I don't get much satisfaction out of it other than killing the opposite faction. Repeatedly.

Now I am back on the fence with the direction I should go. My instant gratification keeps kicking in and has me thinking of shorts and self publishing those instead. It seems that is where my strength truly lies. I have attempted to write novel length works, but in my mind, I seem to fall short. I tried writing out a string of short stories and then tying them together to form the novel and it worked to a degree, but not entirely.

Perhaps this is something I need to grow into rather than jumping in all at once with my clothes and shoes on. The squishy noise of wet shoes can be irritating. :D I also seem to have a short attention span, so focusing on something so lengthy sort of drives me crazy and I drop it entirely. But I have not been able to drop writing about my world completely. I write in spurts and then come back to it. Can you say A.D.D.? Ooh shiny!
Posted by Mel Chesley at 12:14 PM

It's so hard, isn't it. I have some novels that I KNOW I am going to have trouble marketing (like the one you read the query for today) and it is SO TEMPTING to think about self-publishing--then i don't HAVE to follow the rules! But I've decided I really need to put in the time to at least TRY--to hear 'it's great, but I don't know where I'd sell this' --if i could hear THAT, I might think I'm ready.

As for shorts--maybe try to get a couple in journals first--get a feel for what is 'done' on the short story front. I have a friend who has done some great self published stuff--very polished, and I think it really CAN be done, but I think done RIGHT, it isn't all that much quicker.