Review: The Redemption of Althalus... 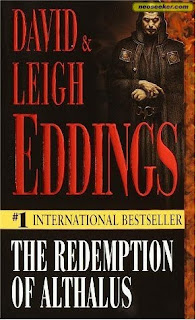 I finally finished it! Woot! Time to move on to other readings, but for now I want to give you my review of the book.

Title: The Redemption of Althalus, 2001 (Yes, I know it is old!)
Author: David and Leigh Eddings

Summary from Wikipedia: The Redemption of Althalus is a stand-alone fantasy novel by David and Leigh Eddings. Its main character is Althalus, a professional thief enlisted by the Goddess Dweia to save the world from the desolations of her evil brother Daeva and his henchman Ghend. As with other Eddings books, it is written in a style which combines dramatic storytelling with wry, light humour.

You can purchase this book on Amazon.

I absolutely LOVED this book. I don't know how to be unbiased about anything David and Leigh Eddings write. I read Eddings in High school as well as all the Elf Quest graphic novels. I sort of started there, you know, getting the idea to write myself.
In this book, Althalus starts out as a thief whose luck just goes to pot. He would never have taken the job Ghend gave him if he hadn't been so desperate for gold. He travels to the House at the End of the World and meets the goddess Dweia.
After enlisting Althalus, Dweia begins to train him and they enlist others to help in their epic quest. Journey. Thing. (Five bucks to whoever gets that reference even if I didn't quote it exactly....)
The House at the End of the World proves to be the catalyst in the events happening around the world. If it were not for this house, the world would have been lost.

Now, while I absolutely adore Eddings... both of them... I have to admit that some of the pieces of the story were just far too convenient. But this is a stand alone epic novel. It isn't part of a series. It doesn't have a prequel. So reading this book was quite fast and seemed to contain all of the elements of their previous series of 'The Belgariad' and 'The Mallorean' all in one shot. So if the story moved too quickly or hopped around too much, you can thank the doors of the House at the End of the World for that. Read it and you will understand what I'm talking about. If not, well then... psssh! I can't tell you! I know, I'm mean that way.

Hi Mel, new follower from Book Blogs. Thanks for checking out my blog :) I'm not a massive fan of fantasy, but I've been known to sample it occasionally. Maybe you can convince me otherwise with some of your reviews :D

Now Ruth, I take that as a personal challenge. :D Thanks for following! I look forward to a new friendship.