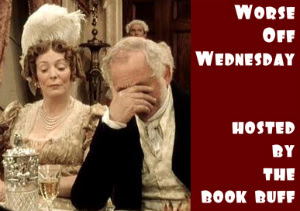 So I got this meme from The Book Buff, who happens to be on a bit of a hiatus these days. Which is fine. I still love this meme and want to continue it anyway.

What to do for this Worse Off Wednesday? Hmm.... I'd have to go with Garion from the series 'The Belgariad' and 'The Mallorean' by David Eddings. Now, granted, I haven't read these books in awhile. I'm currently in the process of collecting them all again. I'm three books short. Then I can start reading them once more because I love these books! 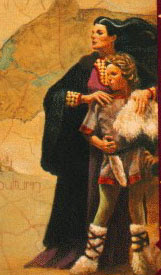 But poor Garion! First his parents get killed and he's forced into hiding his true identity and be taken care of by his Aunt Pol. Then dragged from the only home he's ever known in the middle of the night because he's being hunted down.

Typical, right? If memory serves, I think he actually used his magical power unknowingly, but I can't recall.

So anyway, he's dragged out into the great big world with bad guys hot on his tail feathers and having to suffer the worst thing of all. Baths! His Aunt Pol really is sort of mean about making the poor boy bathe so much. Then from there he's whisked off to places he's only heard of from travelers who happened to come by and regale him with their stories.

In the end, he does become King, he does get married, have children and I'm sure he lives happily ever after, but the road to his destination sure was rocky and filled with adventure. So there's my Worse Off Wednesday.

~ On a side note here, folks, I really, really, really would like to reach 500 followers so I can hold an AWESOME giveaway. I mean... we might ~MIGHT~ be looking at some really cool prizes. So the sooner I hit 500 followers, the sooner you can see what I want to offer. ~
Posted by Mel Chesley at 7:00 AM

0ooo giveaways, and I agree baths are the worst, lol!

350 to go! Get out there and start a following and commenting frenzy, and it will happen.

@ Jen ~ I know, it seems like every David Eddings book I read, the poor boys always have to take a bath. XD

Good luck getting to the big 500 :D How dare she make him bathe?! Though he did become King later on, so being clean so often must have worked, hehe.