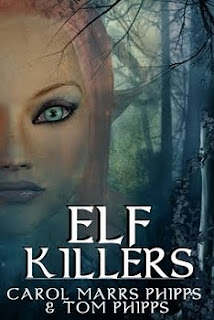 Hey everyone! This is the review I promised of Elf Killers. If you want to receive a copy of this book in my GIVEAWAY here is what you have to do:

It is the very worst time to be in the woods.

Oisin’s plan is to come with his bow to help Aedan and Doona lead a party of children into the forest to gather the maidenhair seedlings his people would take across the sea as they flee the trolls who hunt them as prey. Maybe he can be back in time for supper.

Dyr's plan is an early evening head smash for the foolish Elves who think they can steal away to the sands of the endless eye sting water and build their strange float huts. They will make a glorious feast.

But on the way, Dyr's brutes stumble across Oisin's gathering party and attack, leaving Aedan mortally wounded and scattering Doona and the children to flee in terror into the dark mountain woods, only to be run down and captured by the bloodthirsty trolls.

Can Oisin find the bonfires of the trolls and rescue them before it’s too late? And what then? Will any of them live long enough to reach safety?

Elf Killers is a fast-paced, descriptive ride of emotional turmoil and flight or fight drama right from the get go.

As the young Elves are gathering their seedlings to head off to a new land to regroup and recoup their numbers after being hunted by the Elf Killer trolls for so long, they're attacked once more to be thrown into the cook-fires.

Not knowing if all of the young Elves are dead or alive, the elder Elves have no choice but to sail away for distant lands on schedule, sacrificing the few young ones to save the even fewer of the race.

Carol and Tom provide a glossary in the back of this epic fantasy because of the Trollish language and the Elves Gwaelic speech. If you want to understand the book a little more in-depth, I suggest you read through the glossary first. At the beginning, it was a little difficult for me to get in to simply because the Trollish threw me off guard. Being an avid fantasy buff, though, I was not going to let that deter me.

The book is full of rich, imaginative scenery, Elves (which I absolutely adore and love anyway) and beautiful names, unusual creatures (more so than the Elf Killer trolls) and of course unicorns and Sprites. There is much to learn about this world, which I felt I was only given a bare glimpse of, because the pace was heart racing and the need for survival at the fore-front. But even with such a fast rush, I found the book difficult to put down and the authors found time to show that love can blossom, even in the most harsh of situations.

There were a few errors in the book, but nothing so bad as to throw you off the trail of the story. This book is well written, detailed and smooth. Once you get immersed in the Trollish language, you get the gist of what's going on and can't wait for ... well I can't tell you!

If you like epic fantasy, you will like Elf Killers. A sound story of good versus evil, overcoming all odds in adverse conditions and survival of the fittest.

My Skull and Crossbones rating:

Four solid Skull and Crossbones. What can I say, I'm a pirate and a sucker for fantasy.

Okay, now leave your comment below to be entered in the drawing. Winner will be announced Wednesday August 24, 2011. Thanks!

{Edit~ I will leave this giveaway open longer. New drawing date will be Monday, August 29, 2011. Thanks!}

Eek, sorry, I totally forgot to swing by here last night! :) Yikes, I think I'll be having nightmares about the scenario in this book tonight.

I've been wanting to read this! Very cool :)