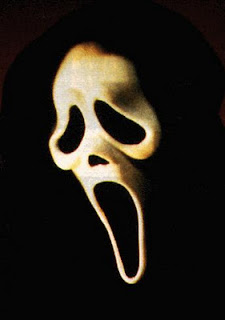 Saturday was a long day for me. Not complaining, but was up at 5:15 a.m. and went to work until early afternoon. After dinner (BBQing, yes, even in the cold... you should have seen us grilling fillet Mignon in below zero weather...) we watched two movies. Green Lantern and Scream 4.

I have to say I like Green Lantern. It was decent and a movie I would watch again. (Ryan Reynolds... hehe!) But Scream 4 topped the night.

I've always been a huge Scream fan. I don't take the movies seriously. (Kind of like Insane Clown Posse) So watching them is absolutely fun for me. My daughter thought it was hilarious because of the look of amusement on my face. We're talking stab fest, here people. What's not to love?

Hmm... that was my dark side speaking. It tends to scare people. Unintentionally of course.

It's funny... I think I could write a really good thriller/horror if I could just figure out a good plot to write about. I tried my hand at horror once and failed miserably, but with my dark imagination I bet I could blow Mr. King away.

Maybe not. He scared the pee out of me with 'Pet Semetary'.
Posted by Mel Chesley at 7:00 AM

Green Lantern was fun! Don't know why everyone said it was so awful.

I know, right? I have to admit there were some slow parts, but overall the movie was good. I enjoyed it and want to watch it again. :D

I don't think the Green Lantern was awful, it was just kind of forgettable and a little boring. I love superhero films so I was a little disappointed!

I can't watch Scream! I am such a coward any horror, even tongue in cheek horror has me hiding behinf the sofa cusions lol!