Review: The Book of Deacon...

My reviews these days are few and far between. But when I find a book I like, especially by a self-pubbed author, I like reviewing it simply to help that author gain exposure.

So here we go! 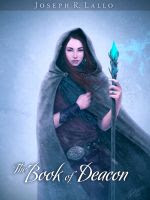 Myranda is a young woman more interested in staying alive than being a hero. Orphaned by a continent-spanning war that has gone on for decades too long and shunned for failing to support it, she has been on the move since she was only a child. One can hardly blame her when she thinks that the chance discovery of a fallen soldier's priceless cargo is the moment that will change her life. No one could predict just how great that change would be. It will lead her through an adventure of rebels and generals, of wizards and warriors, and of beasts both noble and monstrous. Each step of the way will take her closer to the truth of her potential, of the war, and of the fate of her world.

I've said it before and I will say it again... I'm a sucker for fantasy. I liked this book. Joseph Lallo has a nice writing style and the story flows really well. I do have to admit, I saw a lot of typos, grammatical errors and repetitiveness. Those are probably the worst comments you'll see from me about this book. However, these are critiquing comments.

The story of Myranda and her faithful reptilian companion is a very good one. It is the first in a series and I am looking forward to the next two books. There are some interesting creatures in this story, different views on magic and how the characters utilize it. I also have to say, that while this is fantasy, the story may be long, but it keeps going and only slows down ever so slightly. Not enough to bore you, though. I've read some books that you just wish they would get on with it, but this story is one that delivers just the right amount of information as it goes along. The information given paints the picture of the world that Myranda lives in and even though it is in some pretty heavy turmoil, there are areas I would love to see in real life, of course.

I would definitely suggest this book to other fantasy readers. I give it 3 and a half Skull and Crossbones out of 5.
Posted by Mel Chesley at 7:00 AM

I love the sound of that synopsis. Hopefully the writer will find your review and do some extra edits to make the book as awesome as it sounds. :-)

A good editor can help fix those grammar mistakes.

This was a really good book. I did contact the author. I always try to contact the author when I do a review. They usually drop by and comment as well.
He even offered up some coupons so I could read the next two books. Very, very nice of him. :D

Hi everybody! I've certainly read the review, and I assure you I'm always on the lookout for errors to correct. Once I'm done with my current project, I'll definitely try to give the trilogy another read to correct lingering issues. Thanks to all of you who have expressed interest in the book. If you end up checking it out, I'm always glad to hear opinions back at my site. I've mentioned this blog in a post there. Hopefully it sends some people your way. Thanks again!