I'm very, very new to reading Steampunk. Let me just say, I've liked the Steampunk genre... or at least liked hearing about it and was intrigued. I've read my first novella of Steampunk and I'm hooked!

This is one of the first pieces I have read and enjoyed, so here's the review! 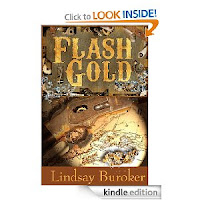 Eighteen-year-old Kali McAlister enters her steam-powered "dogless sled" in a race, intending to win the thousand-dollar prize and escape remote Moose Hollow forever. The problem? Fortune seekers and airship pirates are after her for the secret to flash gold, her late father's alchemical masterpiece.

With her modified rifle and a pocketful of home-made smoke bombs, Kali wouldn't normally hide from a confrontation, but taking on a whole airship single-handedly is a daunting task. Unfortunately, the other racers won't assist her--they're too busy scheming ways to sabotage her unorthodox sled.

When a sword-slinging stranger shows up, wanting to hire on as her protector, she's sure he has ulterior motives, but he's the only one interested in helping her. The question is...why?

This was a really fast read for me. Which sometimes doesn't mean a whole heck of a lot, since I tend to be a fast reader to begin with. But when I state it was a fast read for me, that simply means the overall flow of this story was spot on. Lots of action, lots of fun dialogue and an interesting setting. It has its fair share of typos and errors, but nothing so much as to slow down your reading enjoyment.

I'm new to Steampunk, at least reading it. This is one of the first books I have read and I really enjoyed it. I like the era, I like the concept of steam powered stuff and including magic in the mix just makes it that much cooler.

Kali is a spunky (yes, I used the word spunky) girl with some serious trust issues, but for good reason. I really like some of her inventions, but don't want to give too much away! The fact that there are bounty hunters and even pirates (Pirates!!) make this story even more enjoyable. I really got hooked on this first book and look forward to the rest in the series.

I give this novella 4 out of 5 skull and crossbones.
Posted by Mel Chesley at 7:00 AM

Steampunk is a subgenre of sci-fi/fantasy I didn't know I loved until I learned about what it meant. I've enjoyed various other steampunk novels like Scott Westfield's Leviathan and another novel name Incarceron - the author's name slips my mind at the moment. It's such a beautiful mix of plot, character development and technology.

Flash Gold sounds like a pretty interesting novella. Will have to put this on my TBR.

Thanks for the review.

I am totally on board with Steampunk. I'm looking for others to read as well. Thanks for those suggestions and I think you will absolutely love Flash Gold.

Thanks for taking the time to read and review, Flash Gold!

I also enjoyed Scott Westfield's Leviathan trilogy. A lot of steampunk can get heavy on the world-building and gadgetry, but those were fun and it's easy to get into the characters.