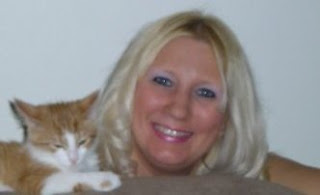 Thank you so much Mel for letting me have the day on your blog to talk to other writers and
reader’s.

A quick little bio about me :)

Dawn Binkley, a writer since her late teens is driven by the written word. She believes, without
writers, the world as we know it would cease to exist. Books, scripts, advertisements, history, the
daily news reports, none of it would be possible without smart, articulate people to write it.

Mrs. Binkley is also a writer and is better known under her pen name Keira Kroft.

Dawn, co-owner of Hellfire Publishing and Hellfire Comics, also carries a vet assistance degree.
Her love for animals is as great as her love of people. She gives a percentage of her personal
book sale profits to the animal welfare league.

She was born and raised in Chicago and now resides in a quiet suburbs in the outskirts of the
city with her husband and her daughter. Dawn spends her spare time working with her cats
Scamper and Sawyer, to achieve total world domination, one shared Twinkie at a time. Her
passions include reading, writing, football and shopping.

Dawn will read anything you put in front of her. Whether she will like it, is another story. Her
preferences are vampires. If an author were to submit something with what she calls “real”
vampires, she will rip the hair out the head of any one that will try to take it from her. Also
amongst her preferences are ghost stories, werewolves and other paranormal beings. She looks
for creativity and wild imagination.

Direct quote from Dawn “Without great imagination, writing would simply be nothing more than
meaningless paper.”

She strives to bring the best fiction possible to the plate and has carefully staffed HP with like-
minded, smart, driven people in the editor positions. The entire foundation of Hellfire Publishing
is built upon community, love and trust.

I would like to talk about the fact that writing is not a one person career.

Who do you have to thank? As a writer, now that your or when your career takes off, who do
you have to thank? I mean sincerely, not just people you promised, whose egos you would puff
up by placing their name and kind words inside your novel. I mean the real people that actually
sacrifice themselves for your career.

My husband is number one. He always supports me and lets me take the time I need to write. He
is also not afraid to tell me if I come up with an idea, that he deems, stoopid? LOL He also gives

me the freedom to take his advice or not and most of the time he is right. But, don’t tell him that,
shhhhh.

My daughter. Yes our kids sacrifice themselves in their own way as well. In my daughters case
it’s giving up time IM’ing her boyfriend and believe me that’s a sacrifice for her!

My proofreader Jeanette, She had to read the first piece of crap I had ever written, God love her.
She was wonderful, very objective and not afraid to tell me like it was.

Books and internet, made it easy for me to look up info and get answers.

Decadent publishing, for taking a chance on a newbie. Because everybody has to start
somewhere, and without people that are willing to do that, we don’t stand a chance. They have
been so wonderful to me, I don’t consider them a starting point, I consider them a home where I
would love to reside as long as they will keep me.

Last, but not least my friends that simply just believed I could do it! Their trust and faith in me,
made a believer out of my toughest critic— myself.

Both of my businesses are both supportive environments to my writing career. Especially the
writers at Hellfire Publishing, they understand that on top of everything I do, that I have a career
as well and they make allowance for that. I am truly blessed.

So tell me, who do you have to thank, really?

Most of all I would like thank the reader’s. Out of the millions of books available nowadays you
chose mine, and that means everything to me. Thank you.

Writing is a career choice and a very tough business. Don’t be afraid to accept help. Writing is
hard work, however it’s the friendliest business :-D

I would like to offer a free ecopy of Glow in the Dark to anyone who comments.

Also known as:
Keira Kroft
www.keirakroft.blogspot.com
Posted by Mel Chesley at 6:00 AM

Dawn you are always welcome here at my little blogging corner of the world! It was great having you.

So who do I have to thank? Mainly my husband and kids. Without their support and understanding of what I do, well, I don't know what I would do! They've been great. The rest of my family have been pretty supportive as well. I also have to thank all the other bloggers in this community, they've been a huge help! I love it.

And thanks to you for taking a chance on little ol' me. ;)