I used to love watching the Olympics. I've killed my television, so I can't watch them there. I can watch it online, though, apparently.

How many books are out there, do you think, that have to do with the Olympics? I'm not talking history, I'm simply talking about fiction books where there is an Olympic hopeful or athlete that has gone to the Olympics?

Well, I can suggest one. And it's by a very fun person here on the blogosphere! L. Diane Wolfe!

She has a blog page here.

And here is a bit about her book, 'Circle of Friends Book One: Lori' ~ 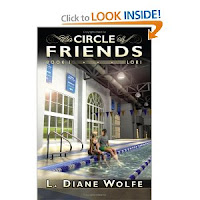 To the outside world, Lori Anders has it all. The only child of affluent parents, she is a gifted swimmer with Olympic dreams. Armed with a winning attitude and genuine spirit, Lori appears destined for success. Yet despite her certainty in the pool, something inhibits Lori from achieving her full potential. Her focus on swimming has left little time for relationships. Lacking in confidence, Lori's light has few opportunities to shine. When an altercation with the school bullies brings her to the attention of the star quarterback, Lori finds herself in a unique position. Jason's affections renew her hope and force the shy swimmer out of her comfort zone. But, will it be enough to achieve her lifelong dream? Described as "encouragement personified", Wolfe's five-book Southern-based series portrays love and friendship overcoming all obstacles.

So what do you think? Something you may be interested in or know someone who would like to read this book? Follow the links to give it a try! Available in paperback and Kindle edition. Also available for the Nook.
Posted by Mel Chesley at 7:00 AM

Nice to hear about a fellow blogger with a timely book. I follow L. Diane and wish her success. This series sounds perfect for those who love regional stories.

Thanks for alerting us, Mel.

Hey, I know that author!

You know, I actually haven't read all that many stories that involve the Olympics in some way. :) I'll have to check it out!

Me too, Bethany! And you are most welcome, L. Diane! Love your spunk. :D

That's definitely the first book I've seen that deals with the Olympics... come to think of it, it's odd that there aren't more out there. Hmm, I must go search!

your blog is great contribution for entire blogosphere,
I follow you now and my pleasure if you join us too http://jakesprinter.blogspot.com/