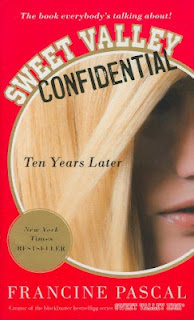 Now with this striking new adult novel from author and creator Francine Pascal, millions of devoted fans can finally return to the idyllic Sweet Valley, home of the phenomenally successful book series and franchise. Iconic and beloved identical twins Jessica and Elizabeth Wakefield are back and all grown up, dealing with the complicated adult world of love, careers, betrayal, and sisterhood.  WANT MORE SWEET VALLEY RIGHT NOW??  Become a fan of Sweet Valley Confidential on Facebook or Twitter.


Be forewarned, lots of spoilers in this review!

In true Jessica Wakefield form, I have to say O. M. G.! I don't know how many of you used to read the Sweet Valley High books in school. I did and my husband gave me a strange look the other night when I confessed as such. I loved the books in high school. They were a quick, easy read and an escape from my own teenage angst at the time. I even picked one up for my daughter when she was in high school and she liked them well enough, but didn't fall into the series like I expected her to. But then again, she doesn't read much. But she did like them.

This book, Sweet Valley Confidential... I'm going to blatantly honest. It is NOT worth the money. I bought the Kindle version. Even though we're scraping right now, we do give ourselves a tiny allowance once in awhile so as not to feel completely cut off from having some kind of fun. Well, I bought this book and I want my money back.

Let me start with the characters. I think Ms. Pascal took all the character descriptions, threw them in a hat and just tagged one to whichever character she hit with a dart first. None of them were true to form. First, we have Elizabeth. While the old Elizabeth Wakefield was sweet and kind, this one seemed like a cardboard cut out, at least that was the personality she presented. Jessica took on the role of Elizabeth and Todd was background material. Winston was killed off, Lila remained Lila and Enid turned into Dr. Snob. Oh and Liz and Jessica's brother Steven? Gay. Some of the characters stayed the same, some seemed to grow and mature. But that isn't the half of it.

Now, just to be sure I am not hating on this because of all the radical changes, let me tell you how the story flowed... It jumped from point of view to point of view like a haphazard pogo stick. It went from being in the present from Liz's view to being the past from Jessica's view. It was all over the map. I got confused more than once. But having paid the amount of money I did for the Kindle version I was not going to discard it.

The other thing I didn't like were the expletives that seemed to be dropped in randomly to make the characters seem grown up. Didn't like it. I am all for using expletives in writing, but make it work with the sentence, don't drop it in like an afterthought. That and the sex. It felt as if all of the characters were still seventeen and playing grown-up. They were way out of their element. I don't know, I feel like this was just tossed out there to bring interest back to these beloved characters but now I feel more ashamed of them. Granted, they are not supposed to be like they were in the books of old. They're supposed to be grown up, mature and out in the real world. But I didn't even get a feel for any of that. The work of the twins and Todd was described, but briefly. It all focused so much on Todd and Jessica's betrayal and how Elizabeth felt, that there was no more room for anything else.

Yes, Todd and Jessica were getting married. They went behind Elizabeth's back. That was way out of left field and, while a great twist, just flopped. So, I hate to say it, but I am not even going to read the new e-series. It just seems like a clean up series for the convoluted mess of this book.

Sad, but I give this book two skull and crossbones. :(
Posted by Mel Chesley at 7:00 AM

Oh, I'm bummed to hear that. I loved the series in high school so, so much and just purchased this book last week because I found it in the bargain bin.

Maybe I still have my receipt...

Thanks for the review!

I was bummed too! I mean, I really liked these books in high school as well. Yeah, they had their inconsistencies, but still...

Oh and just a suggestion, there was one person who reviewed the book better than I did on Amazon.com. Might want to check that out, she hit the nail on the head better than I did. Just a thought.