Book Review: 'Was Once A Hero' by Edward McKeown...

Title: Was Once A Hero 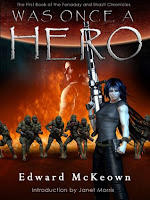 Reluctant privateer Robert Fenaday searches the stars for his lost love, Lisa, a naval intelligence officer whose ship disappeared near the end of the Conchirri War . He’s joined by the genetically engineered assassin, Shasti Rainhell, whose cold perfection masks her dark past. Both are blackmailed by government spymaster, Mandela, into a suicidal mission to the doomed planet Enshar. Leading a team of scientists and soldiers, they must unravel the mystery of that planet’s death before an ancient force reaches out to claim their lives.

Sometimes it is difficult for me to get into a science fiction story. Some of the terminology used can be quite confusing. Not this time around, though. It was an easy read for someone like me who isn't a hard core sci-fi fan.
Robert Fenaday's loss of his wife is heartbreaking and his search for her seems fruitless. Now, with the Conchirri War over, funding his search becomes a bit of a problem. Enter the little Enshari who is about to change all of that. Granted, the government wants to see Fenaday go on this mission ... and not come back, but this isn't why Fenaday chooses to accept.
Shasti Rainhell is definitely not a woman you want to mess with. She lives up to her surname in lots of ways. Always by Fenaday's side, she isn't about to let him go to the Enshar planet without her.
This book contains a myriad of aliens and robots, cyborgs and intrigue. Enshar was attacked by an unseen force and McKeown keeps you guessing until the end as to what exactly wiped out almost an entire species and then some. Very well written, great plot and strong characters. I would definitely read more from this author.

5 out of 5 skull and crossbones
Posted by Mel Chesley at 7:00 AM

I do read science fiction, but I don't like the hard-core, heavy tech and terminology books either. Will have to check this one out!