It's Friday!! I have one  more week to go until Christmas break. Woohoo! Think you're tired of hearing about my book now? Just wait...

Okay on with the favorites!

Hmm... this is starting to get difficult, I had so many but I've been doing this post for some time now. Oh yeah, how could I forget?? R. A. Salvatore. The creator of the most awesome Drow character ever: Drizzt! I've only ever read a couple of the books with this totally awesome, heroic character. I've sort of forgotten about them as I built up my 'To Be Read' pile over the years. I read like two of the books and then suddenly got involved in something else. There was also a period of time where I didn't read for a couple years. Yes... years. But we won't go there. So I should add more of those books to my list. I really, really liked them!

I absolutely love action films, especially martial arts films. One of my absolute favorites is 'Crouching Tiger, Hidden Dragon'. WITH subtitles, thanks. I'd rather they speak their native language instead of the English dubbing. Gah. Anyway, beautiful story from ancient Chinese mythology.

In line with the favorite movie there, I will have to say I love the soundtrack to it. Yo Yo Ma is an extremely talented cellist. I have the soundtrack on my writing playlist on my iPod. It's very inspiring when writing!

With my love of Dungeons and Dragons, I found this wallpaper and just had to have it. It's classic. 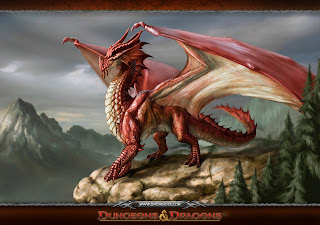 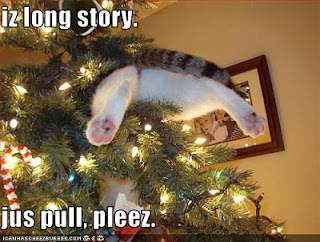 Ha! I've used this one before, for the holidays. But it's still hilarious. Have a great weekend everyone! What are your plans for the weekend?

Not even going to ask how the cat got stuck.
It's been a while since I read any Salvatore, but Drizzt was a great character.
Crouching Tiger is an amazing film and yes - no dubbing! Give me subtitles. I want to hear how the original actors said their lines.

Yeah, I don't think I want to know how kitty got stuck either, Alex.

Okay, so this post could be dubbed for me as well. Crouching Tiger, Hidden Dragon fan. Even set up a Yo Yo Ma Pandora station behind his brilliant work from this movie's soundtrack.

I scored a collector's edition with Drow by Salvatore. Been looking at it but need to actually read it lol!

And poor, poor kitty is all I can say lol!!

LMAO on the cat in the Christmas tree...and I've been there so I know what a mess that can be...but...still, too funny!

Love the dragon, too, Mel.

Weekend? What weekend? Work, work, work! (Monday going to see The Hobbit, though)...Have a great one!

Now why didn't I think of setting up a Pandora station with Yo Yo Ma's work?? Thanks for that idea, Angela!