Book Review: Children of Sun and Moon by Matt Larkin...

Title: Children of Sun and Moon (Book One of the Skyfall Trilogy) 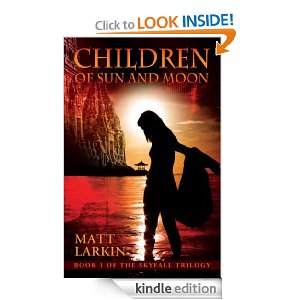 The Lunar King bargained his daughter away in marriage to end generations of war between the two dynasties of the Skyfall Isles. The King sends his niece Chandi along as handmaid to his daughter. Chandi has two tasks: watch over her cousin, and spy on the Solars. The Solars cost her everything she cares about, and now she wants nothing more than proof of their treachery so she can go home.

She knows little of spying, but the blood of the Moon God running through her veins gives her powers mortals can’t match, powers that let her slip into places she’s not supposed to be. Of course, the more she uses her powers, the faster she becomes a lunatic.

When she discovers a Solar soldier, Naresh, watching her, she decides to return the favor and stick close to him. But as he shows her the wonders of the domed underwater city, she begins to realize the Solars are not what she thought. Soon, she’ll have to choose between loyalty to her people and her own heart.

I found this book to be an amazing read. Pure, solid fantasy the way it is supposed to be written. Larkin has built up the world with much ease and grace. Chandi, Naresh, Landi and Malin are all solid characters. Even the characters that are secondary have a depth to them that most secondary characters do not.

Naresh is a great character as well. He doesn't come off as a pompous jerk who insists that girls cannot fight. He has been trained with women fighting right beside him. Which includes Landi. She could be described as one of his best friends, but the relationship between these two Arun Guards goes further.

All in all, this story keeps moving at a good pace. You don't get bogged down with so many details that you want to tear your hair out. Some of the words are a little daunting and trying to pronounce them can be an issue, but if you are a fantasy buff, you know how to bypass it all and still keep enjoying the read.

I'm going to throw out a suggestion here, something I rarely, if ever, do. If you are going to purchase this book, I suggest you pick up the prequel to the series first. "Curse of Witch and War". It's a short read and opens you up to a lot more of "Children of Sun and Moon". The reason for the suggestion is it prepares you for the world you are about to enter. Of course, don't take my word for it. Read them in the order you like.

I will absolutely be picking up the rest of the books in this series.

It was a most enjoyable read, Tyrean. If you like fantasy, you'll like this, I'm sure. :D