1.Please tell us a little known fact about you.

I once managed a heavy metal band called 'Big Jesus Trashcan'. We were terrible :-)2.What was your favorite genre to read growing up? Is this the genre you currently write in?

I enjoyed fantasy and horror a lot when I was younger. I write mostly horror at the moment.3.What inspires you to write?

The stories in my head. I seem to be full of ideas and writing is the best way to set them free.4.What sort of atmosphere do you need to write?

I'm quite lucky in that I can write in most conditions. I do like a bit of music to help the mood.5.What is your all time favorite book?

Excession by Ian M Banks. I re-read it every year and enjoy it every time. Banks does a great job with the AI characters.6.Who is your all time favorite character that is not your own.

A tricky question, probably Lucifer from Paradise Lost. He acts like a petulant child sometimes, but you have to admire his courage.
7.Who is your favorite character of your own creation?

Friar Francis from The Cult  of Me and Conversations in the Abyss. He's wise and quick witted. He's also not afraid to take on some very dangerous enemies.8.When did you decide to become a writer?

I've written short stories for most of my life, however it's only in the last 2 years that I've started making my work available to the public.9.Where are you from?

I'm currently living in the eastern part of the UK. There are hardly any hills around here, it's a lovely part of the country. 10.Why do you write?

For the love of it. I enjoy telling stories and creating worlds.11.What’s the best piece of writing advice you have ever been given?

Keep writing. Keep working on your skill, you will get better.12.What’s the worst thing someone has ever said about your work?

I've been fortunate that I haven't had any bad reviews as yet. I think the worst I've had was from  an editor that said my writing was 'competent'. I'm sure I'll receive worse at some stage.

13.Has your writing ever been compared to another, famous author? If so, who?

Not yet, but when they do I hope it's somebody good

14.And last, but not least, something really random:~ What is your favorite meal?

Roast dinner with all the trimmings and nice rich gravy. 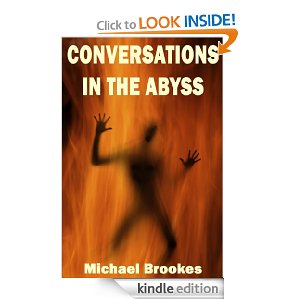 Conversations in the Abyss

Stealing Lazarus’s miracle gifted him immortality. Combined with his natural ability of invading and
controlling people’s minds this made him one of the most dangerous people on Earth.

But the miracle came with a price. His punishment was to be imprisoned within the walls of an
ancient monastery and tormented by an invisible fire that burned his body perpetually. To escape the
pain he retreated deep into his own mind.

There he discovers the truth of the universe and that only he can stop the coming Apocalypse.

Michael Brookes is an Executive Producer with a leading UK games developer. Working in games and
writing are two of his life passions and considers himself fortunate to be able to indulge them both.
He lives in the east of England, enjoying starry skies in the flattest part of the country. When not
working or writing he can sometimes be found sleeping. Which is good as that is where many good
ideas come from.

Other Books by Michael Brookes

The Cult of Me

For too long he dwelt apart, watched those who passed him by. With his unique abilities he entered
their minds and inflicted terrible suffering upon them. They didn't even know who he was. The game
has lasted for years, but now the game has become stale. On an impulse he decides to make a final
and very public last stand. After surrendering himself to the police he enacts his plan to seize the
prison for his final bloody act.

There he discovers that he's not as unique as he once thought.

A quartet of dark short stories (10,000 words) to thrill and chill.

The Yellow Lady
Grave robbing is a dirty business, in more ways than one. When he disturbs the grave from a
childhood scary story he discovers it's not always treasure to be found.

This Empty Place
At the heat death of the universe, Death contemplates his existence.

Forced Entry
Terrorists seize an average suburban house. A Special Forces hostage rescue team is sent in and
encounter more than they were trained for.

The Reluctant Demon
A young demon prepares to take his possession exam.

Thanks for the feature!