A magic school. A heist. And enchantresses falling from the sky.

In the Mindvault Academy, magic imbued within the stone reroutes the flow of gravity. The school's enchantments allow for architectural wonders that inspire the empire's next generation of great minds.

Now those minds are falling. The Academy's spells are collapsing, its keystone jewels stolen. Saboteurs have invaded the magic school in a political heist a year in the planning. The attackers make but one mistake: Getting between Enchantress Hiresha and her research.

Hiresha, Provost of Applied Enchantment, endures her own pathological sleepiness to study unorthodox magic. Now twelve warriors have invaded the Academy, the only home she has ever known. Hiresha plans to expel them with the help of a dangerously charming illusionist, her loyal bodyguard, and spells by no means in the approved curriculum.

I'm going to sing nothing but praise for this latest installment of A. E. Marling's series. From the first book I read, (Brood of Bones) I have loved Enchantress Hiresha. The magic system in this book has always intrigued me.

Marling's writing, once again, flows like an elegant river. To read one of these books is pure joy for me. There is something about the way Marling writes that is intelligent, captivating and delightful. Yes, I used the word 'delightful'.

You are finally introduced to several things in 'Gravity's Revenge'. First, Hiresha's Mindvault Academy. The school of magic where Enchantresses are trained. You get a glimpse of her room, her home and the other teachers and leaders. The other thing you are introduced to in this book are illustrations! You're finally shown what Marling's world looks like. You also learn the source of the magic, and that when removed or tampered with, can fail. 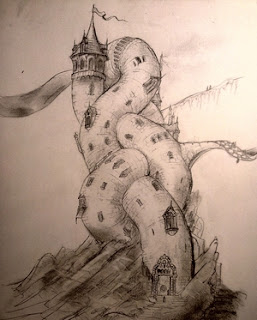 Enchantress Hiresha becomes the target of Bright Palms, priests dedicated to ridding the world of Feasters. They'll do anything to get the Lord of the Feast, including sacrificing Hiresha's Elders. The issue is made more complicated when they strip Hiresha of her own, personal power. The power of her gems. But most everyone is on Hiresha's side, wanting to help, even the little Fennec fox.

You can either start with this book or at the beginning, with 'Brood of Bones'. There is an order to the stories, but they stand alone rather well. You won't get lost if you start here. So kudos to Marling for yet another enjoyable read that I could not put down!

Is it for adults or younger?

Alex, it's a good book for both adults and YA. Might be a little complicated for anyone under 13. It's clean story telling. I would recommend it to my nieces, who are 14 and up.

This is a good synopsis, and it makes me want to read the book :) Is the book on the internet and/or hardcover?

Mel Chesley, thank you for writing this review. May magically lightened gold coins rain on you.

Marten, I'm back-flip happy to hear of your interest. You can find Gravity's Revenge as an eBook on Amazon and Kobo. You may also buy it as a paperback on Amazon.