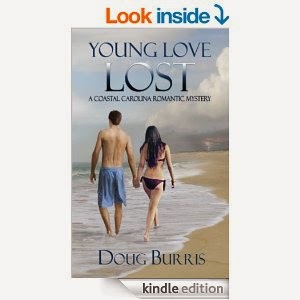 About the Book (From Amazon):

Where does innocence go?
While vacationing on the beach at Emerald Isle, North Carolina, high school student David Jennings meets an intriguing girl. Mary Roberts ignites feelings that stay with him even after they both return to their homes. Summer after summer, they reunite, building on the love that started to bloom from the first day.
Not only does David discover romance, but he also learns what “family” can mean. The loving Roberts family is in stark contrast to the Jennings. David is the only child of Roy, an ex-Marine and rigid cop, and secretive Sarah. As the young couple explores their future, the family secrets unravel—until tragic events manage to both bring together and divide the two families.

About halfway through this book, I was about to put it down. I was right at 56% and for me to remember that is a big deal. So what changed my mind? It finally got GOOD.

This book has a slow start, for me at least, I won't lie. It's about two families who vacation in the same spot, year after year, only this time, the two kids finally meet. David learns what families are really like, as he has grown up with his military/trooper father who likes things done a certain way. He likes order and stability. And his mother, the one who wants more out of life, but isn't allowed to get it and wouldn't know where to start if she tried.

Mary seems to have the perfect family, but David learns about her brother's shady past and problems, so he gets that not all families are perfect.

The two of them hit it off right from the start. It's a very sweet story and I liked it a lot, but by the 56% mark, I was ready to put it down.

When I say it finally got GOOD, I mean, the story finally picked up the pace and we were thrown into some action. I don't know if the author dragged out the beginning intentionally or not, but by the time we got down to what the story was really all about, it moved along quickly. It was very well written, the characters were well developed, almost too well developed at times. The flow was, after the 56% mark, quick and smooth.

What I mean by 'too well developed' was the redundancy of some of the inner dialogue of the characters. I would say about half of that could have been cut out and people would still love this story and feel they got their money's worth.