Welcome to another Ladies and Gentlemen of Horror author interview! These anthologies will be available October 31, 2017. I thought it would be nice to let you all get to know them a little better. Also, proceeds from this anthology go towards the American Cancer Society, so it's for a good cause as well as a good scare.

On that note, please meet Henry Snider! His answers will be in gold. 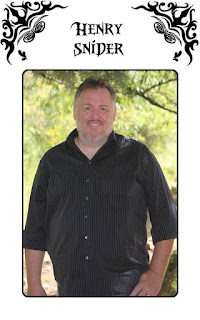 1) Is this your first year participating in the LGoH?

Yes, actually. I only found out about it last year.

2) If so, tell us what drew you to this anthology.

A friend who's a member of our writing critique group, John Howard, told me about the anthology and what a good cause it was for.

3) If you’ve written for previous LGoH anthologies, list the story titles and years.

This is my first go around with Ladies and Gentlemen of Horror.

4) What is your preferred genre?

Horror for the most part, but I have to admit recently dipping my toes into the fantasy realm.

5) What other titles do you have published?

Several stories in different anthologies over the years. I spent most of my time teaching and running writing groups until recently. Short fiction is being sent out regularly while my first novel is currently under review with an agent.

6) Where do you get your ideas?

Now you know, this is the one question that all authors hate. We fantasize about all the terrible things we could do to people who ask us this question. You know, like tying the interviewer to a chair and force them to suffer reruns of The Brady Bunch until madness sets in. Seriously though, I'm afraid my answer isn't all that different from everyone else's - I get my ideas from everywhere. I wake up and see a bird fly by the window, it becomes a crow with a nefarious agenda (you'll have to read A MURDER OF CROWS in this year's LGoH to know what it is), or a little kid refusing to take a creepy clown mask off (THE CLOWN - Best of the Horror Society 2015). Even a boring drive across Wyoming can give birth to something (SANDCASTLES - Canopic Jars). Letting an author sit quietly isn't punishment, it's opening the door to an amazing playground.

7) Does writing energize or exhaust you?

It actually depends on the scene I'm writing. If I'm building to a climactic point then it's energizing and I just don't want to quit. Of course if I've just written the scene I'm left exhausted, both emotionally - and in some cases physically - spent.

8) Do you write for yourself or your audience?

Early on I was writing what I thought others wanted to read. It wasn't very good. Then I focused on only working on things that filled my daydreams...and sometimes my night terrors. I've stayed on that side of the fence ever since.

9) What other authors are you friends with and how do they help you become a better writer?

Not a fair list. Beyond the normal list, my wife who's a fellow author and editor, everyone in my writing group, Fiction Foundry - we really are just one big dysfunctional family. They make me twitchy, but usually in a good way. But - for the record, they've made me have a drink or two, too.

10) What was the hardest scene to write?

So far a sex scene in my novel because my protagonist is a woman. I wanted to make sure I got the physical /and/ emotional aspects right. Again, my wife, along with the other women in my critique group were fantastic at guiding me through the scene with no teasing (smell that? that's sarcasm, readers - they teased the

11) Do you Google yourself?

Once in a great while. It's entertaining to see how dead I am in different parts of the country. Boring obituaries, though. Not one rustler, car thief, or drunken pilot in the bunch.

12)  Do you hide any secrets in your books that only a few people will find?

Yes, all the time. A fun one is the abandoned drive-in my novel takes place at. In reality, it's based on an old drive-in theater that was on Broadway in Richmond, VA. In the summer of 1979 I was still eight years old and my parents took me to the drive-in. The double-bill was Fantastic Planet (freshly released here in the states in English) followed by Phantasm. They thought "Oh, a cartoon for him to watch and he'll go to bed." They sat through it mortified at what they'd taken me to. Then came Phantasm. No sleep for me - I fell in love with the silver sphere, demented jawa zombies (let's face it, that's what they are), and - of course - the Tall Man. I told you all of this to pass on that the summer of 1998 - almost twenty years later - I was introducing my wife and nearly two year old son to family back in Richmond and got the grand idea to see if the drive-in still existed. Hollie was in for a movie and off we went. While in line I commented about how high the pines were so no one could even see the screens. She noted that there only appeared to be men and one other couple sitting in line. Yes folks, this is going where you think it is. The old drive in had become - you guessed it - a porno drive-in. And there we are, me with a shocked expression on my face, a wife who's laughing so hard she nearly shot soda out her nose (totally the /wrong/ way to do Coke, by the way) and an infant seat in the back - all three of us lined up innocently to see a skin flick. We left, with me more than a little embarrassed. I didn't hear the end of it until...hell, I think she mentioned it last month. That brings me to my novel which takes place at an abandoned drive-in theater whose history oddly mimics the actual place. The short answer's, "Yes, I do put secret things in my writing," but it's not nearly as fun.

13) Do you have any little known facts you’d care to reveal to us now?

I don't know - I tried out to be an extra in the original Red Dawn and discovered why my parents always caught me in lies - I can't act. I had a hard time keeping clothes on until I was in my mid-twenties (mooning, streaking, skinny-dipping - let's just say Calvin and Hobbes has the right idea). I have little-to-no shame when it comes to a good laugh. Be warned.

Thanks so much for your interview! And yeah, sorry about question number six. But you know, all readers want to know! Plus, I get my ideas from very strange sources. I'll have to tell everyone some day.

Here is another link from Henry for all you readers to visit. It's amazing!:

Ghost Town Writers Retreat
Posted by Mel Chesley at 5:30 AM