Semicolons. You love them or hate them? In between? Don't understand them? Think they're over-rated?

Well, let's take a look at the semicolon and figure out why some people think it's a big, bad scary.

Semicolon definition: a punctuation mark (;) indicating a pause, typically between two main clauses, that is more pronounced than that indicated by a comma. 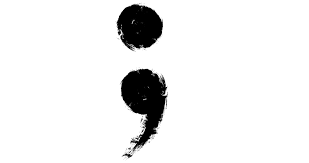 The proper use of a semicolon, is to help sentence structure. It is literally the opportunity to end your sentence, but choosing to go on. If you think your sentence could potentially become a run-on, the semicolon could swoop in and save the day.

I use them, more often than not. Some people think it is an outdated punctuation, that it doesn't need to be used at all. But think about it. There are a lot of great authors, even now, who use semicolons. Next time you pick up a book, keep an eye out for them.

So why are they scary? Most writers don't know how to use them properly. And yes, there is that chance that you could screw up one of the best written sentences of your life; but I doubt it.

When you have a sentence structure that can be stopped with a period, done, over, no more words, but you have just a little more to say, drop in the semicolon and impress your editor. Just remember, the words that follow your semicolon should be able to stand alone as its own sentence. Yes, it is a bit of an afterthought, but it should be just as concrete as a normal sentence.

I hope this little bit of information is helpful. If you still have an adversity about using semicolons, that's okay. They're not for everyone. It is part of a writing style, you do have to get used to them. And like everything else, don't overuse them and frustrate your editor and readers.

Leave me your thoughts on this underrated, often misunderstood, little punctuation mark. I'd love to hear what you think.

I usually don't use them. I just don't think about them.

It's a writing style. So not everyone will use them or think about them. I won't hold it against you lol