Elves, Elves, Elves. Maybe later I will do my best Elvish impersonation. Snarf! Bad joke, I know. These are not the Keebler Elves or the Elves from World of Warcraft. Which, I do have a Night Elf Druid... level 16, yes I am a geek. Lol!

I love Elves. I always have. I think Elves are the most beautiful of the fairy folk. They have a mystery that just draws me to them, I don't know why. So when I wanted to have Elves in my world, I tried to think of what an Elf was to me. Not to other people. While they are fair, they are still human or as human as they can be. So even though my Elves are immortal, they can choose when they die. Don't get me wrong they can still be killed in combat, but if they live on, they don't have to live on forever. When they do die, their essences are returned to the earth, their energy is returned to the rocks and the trees, even the air and sunlight. I do have several different species of Elves, one being the Kefferlings. 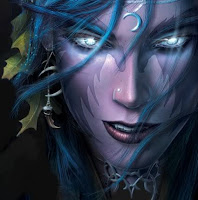 The other is Amnis D'thirii. These are Water Elves. They have glistening scales much like merfolk would and if they don't live near water, their scales will flake off and their "thirst" will kill them. So if they travel, they must always be near water or order tubs for special baths. They range from light green in color to dark blue, varying shades of water. Their skin, hair and eyes are the same color only varying in lightness or darkness. If they live near running water, they draw off of the energy the moving water creates and can use it for spells. They can also shape-shift either partially or wholly into water creatures such as merfolk, selkis, dolphins or just plain fish. Their mating is quite different as they don't ever choose to be with one individual. They can have children outside of the Elvish unions, mostly with humans. Once the children are born, the rest of the "tribe" takes care of them and the parent is free to do as they wish. They're restless creatures and do not like to be in one location for very long, yet if they live near water, they usually return to their homes. Most of their time is spent traveling and roaming.

My Quistahn are Ice Elves. They live on a northern continent called Istlandu'us. There is a large lake where an Ice Dragon once lived, but was killed and the carcass remains at the bottom of this body of water. The magic of the Ice Dragon has saturated the water and when the Quistahn arrived, their first drink of the pure water cursed them for the rest of their existence. They are usually various shades of blue in color for skin, their hair is white and their eyes are an unusual shade of blue and seem to glow. All of their weapons are ice based. They make darts of poison that, once inside their enemy, melt and leave no trace behind. They also use crossbows, the tips of their arrows made of the same ice poison as their darts.
When near these creatures, you will feel cold, however no one has been close enough to them for long. They make extremely good assassins because of their special weaponry. When they do travel, they carry a waterskin or vial of water from the lake where they live. The smallest sip will keep them cold and keep the magic of the dragon within. They practice the Elven rituals of mating and children.

Elves in general do abound in this world as well. Taller than most humans, fair in skin and their hair and eye colors encompass the colors of the rainbow and all in between. In major kingdoms, the Elven hierarchy is almost always a Matriarchal society. The Queen rules over all, not always equal with her husband and the first born daughter is the one who inherits. If there is no first born, a wife of a son will usually rule.

*Pic from World of Warcraft.
Posted by Mel Chesley at 10:00 AM