And it is Monday. And we're on the letter V, closing in on the end. V...vee... Well, Voice is always a good V word. I tend to be rather omniscient in my writing. But we all talk about Voice or View.

I have a beautiful view from where I live...

I have a character named Vendras (Vehn drass). He's rather funny, quite charming when he wants to be and a typical male. He tends to constantly wager with his friend, Farrehn (Far en) who happens to be half ogre. There's something else about Farrehn, but you have to read my stories to figure it out. Hehe! Vendras can also be pretty crass. He's my comic relief when things get too stressful.

What's that? ::Hears whispering:: No, Vendras, I can't tell them about stuff like that. This is a clean blog.

Victory is another good V word. But victory comes with a price. Doesn't everything?

Vengeance is another good V word that I write about quite a bit. It seems to me that the entire Li'endrin (Lee en drin) bloodline has vowed vengeance upon the world. But where did that come from? Just because the Warriors of Relavia (Ruh lah vee uh) split and formed their own kingdom, one full of Warriors who follow the code of honor and are not as ruthless or as underhanded (See...underhanded) as the Relavian kings of old?

I'll let you in on a little secret.

The Relavian bloodline is cursed. Yep, that's right. Cursed. Doomed to continue repeating the mistakes of their forefathers, reincarnating over and over again into the same family tree until someone gets it right. Sounds like... fun. Heh. Maybe not. 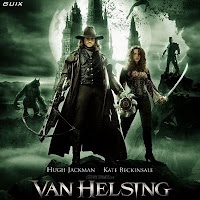 ORH! come on? Tell us please? Farrehn, ok, could that have come from Farenheit? Is he a hot, spicy, good-lookin joker who can change the whether to his own liking?

Family curse,huh...sounds sinister. What mistakes, who breaks the cycle and what does it cost them to do so?

Very cool! I wanna hear more about Vendras... sounds like my kind of troublemaker! Haha!

I like the idea of victory having a price :)

Loved the blog, so many good v words. only four more to go.

Part of Van Helsing was filmed at Downey Studios not far from where I live. They built an incredible set outside in a parking lot near the medical center where I go sometimes.

Oh, Van Halen takes me back. (the original--David Lee and his gymnastics were half the fun--Sammy never got the silly, campy thing that was a huge part of the charm).

I like the sound of Vendras... sounds like he is a little naughty, which is always good.

You are so funny! I loved your little side chat with Vendras! :)

Van Halen before Hagar... I did not like Van Hagar, thanks. :D

And Lee! I'm so jealous. I love that movie.

Now see... y'all are wanting me to give you more information. I knew that would happen (Jessica! Raquel!) :D I will let you in on little secrets someday. But ... not today. I know, I'm so mean!