You Know it is Sunday When...

I don't have a letter of the alphabet in my post title. Hehe!

I am going to use today to do my award given to me by the wonderful Michelle McLean. She's so awesome! 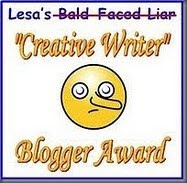 The rules are rather simple for this award: Post six fabulous lies and two truths about myself. Let's see if I can pull this off. Ready? Okay!

1. During the summer of my Junior year of high school, I would sneak out every night. One night near a golf course, my friends and I came upon a group of college kids drinking around a fire. We threw rocks and I nearly got caught! I hid behind a dirt pile and someone ran on top and looked everywhere but down.

2. As a kid we moved around a lot. I've lived in places like Japan, Netherlands and Germany.

3. I speak fluent Japanese and have been invited to businesses as a translator. Half the time they wanted me to dress as a Geisha but I drew the line there. That was pretty unprofessional!

4. As a child, I attended Clown School, where I learned how to juggle, create balloon animals and learned the tips and tricks of makeup. I also performed at a fair and later, I was the clown for the Pizza Hut I worked at for kid's night.

5. I'm an ex-Monster Truck professional. I used to drive over five cars and jump through hoops of fire. My truck's name was The Destructo-saurus.

6. I've discovered that aliens are real, but no one believes me. However, the United States government keeps close tabs on my movements and sometimes camps out in my yard.

7. When I went skydiving, I accidentally pushed someone out of the plane without a parachute. I had to jump out fast and catch them and open my chute so they didn't die! I felt horrible.

8. Because of my love for pirates, I actually got cast as an extra crew member in "Pirates of the Caribbean 2: Dead Man's Chest". I got to meet Johnny Depp and Orlando Bloom!! ::Swoons::


Okay, there we go! Pick out the two truths. I'll let you know tomorrow. In the meantime, I'm going to pass this award on to...

Mary McDonald at Mary McDonald Has The Write Stuff
Tahereh at Grab a Pen
Summer at "...and this time, concentrate!"
Niki at Wool 'n' Nuts
Roland at Writing in the Crosshairs

I'm going for #s 4 and 5. I skimmed this for the first read & at first I thought you were telling us they were all true. I thought, "Wow! What an exciting life!" LOL.

hehehe thanks for the award. I love your lies and truths! umm I choose #1 and #8 as your truths lol

Ah, I already know the truths now! Thanks for the award! :-)