On To Something Else...

Okay now that I have completely alienated like a good majority of my followers, I'll move on to something else.

First, let me just stress that we're not all going to agree on everything. That's the beauty of being human. I do not dislike you for your opinions, please do not dislike me for mine.

With that being said, I would still like to continue on this train of emotional thought in writing. How important do you think it is to have some romance in your WIP? 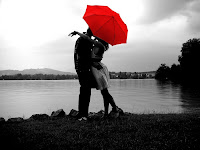 Again, this all started while talking to B. Miller. I don't mind WRITING romancy kind of stuff... but as I was telling B., I read back what I have written to my husband. It is during these readings that my husband will tell me if I'm keeping on track with the plot, characters, etc. Black Rose is his creation, a character he made to play Dungeons and Dragons with, so I definitely read back to make sure I am spot on with his quirks and traits.

When I get to what I call "Squishy" parts, I tend to change the tone of my voice to a flat monotone, I speed up and I curl my lip. In my opinion, having a bit of a love scene or romantic encounter or some such nonsense tends to give the reader hope. Hope that if this character is just bombarded with one hurdle after another, that if there is love, then there is hope for a chance at happiness. Look at Harry and Ginny. I was so happy reading Harry Potter when it got to the point of their little romance blossoming. It gave me hope that should Harry live through all of this torment, he had a chance at a happy ending.

While I may not be a huge fan of romance, I'm a fan of happiness. Love brings happiness and hope. So where do you stand on having a little romance in your writing? How do you deal with it? Do you feel like I do, that it is "squishy"? Or do you thoroughly enjoy when you get to write about it? That is, if you are not a romance author...

Again, my apologies for airing my opinions of certain books and authors. We can't all agree, but I hope I have not offended to the point where you stop following me. I'm always up for a good debate! I'm always looking to hear the other side of the coin, shall we say. While I am not always swayed, I do respect you and your opinions! I hope everyone has a great weekend.

Was there a debate? I must've missed it...

My upcoming book has no squishy parts, because there's no female characters. Zero. However, the story I'm working on now will contain a female character that does evolve into a love interest. It's new territory for me, but I intend to keep it low key. (The relationship will develop over the course of the story through a battle of wills.)

And damn - never thought about using my D&D character! That's a great idea.

You have a good weekend as well, Mel!

I do have some squishy parts in my WIP, but I actually enjoy dealing with the love between friends and family more so than two romantic partners.

And why are you so worried? Who could possibly be upset with you? You're just being silly! :D

Well, Alex, I would hope there is no squishy in a WIP without women. o.O Not against that, but not exactly my read either... ;)

And Emily, I adore you! Thanks. :D

Love between family and friends is just as important! That was going to be the next post. ;) But I certainly have a sprinkling of just about every emotion in my works. You deal with it on a daily basis, so why shouldn't your characters?

My goodness sweet Mel! I think we must be related! Worrying too much over stuff and nonsense today! I seriously doubt you have offended anyone and if you ... they're far too easily offended to keep around anyway! So there!

Still shaking my head over Alex writing a whole book without a single female. Who does the laundry and dishes in that world? And can you even imagine the bathrooms? {shudder}

Hugs to you dear Mel! Love ya!

Well, I'm having plot issues with my WIP, so when write, I tend to write 'squishy parts because it's fun and easy. lol. I was just telling someone that I might just make it almost all squishy parts and call it erotica--otherwise known as PWP?

Oooh sometimes I write squishy parts. Then again sometimes not. I can never force two characters together so if it happens it happens and it suprises me as well as everyone else :P

And sometimes I think ewwww icky squishy squishy but other times it just seems right.

Also, who were we alienating? I wasn't offended. I *coughs* liked the post about, um, yah know but sort of forgot to comment because I had a bazillion tabs open (I don't know why I do this but I do)

I KNOW *hugs tightly* I'M SO SORRY *weeps* BUT I'm here now and you should know it was good :)

It sounds like you are with romantic scenes like I am with mushy greeting cards. Even when it's my own anniversary, I can't bring myself to give hubbers a sappy romantic card. Blech...

When reading, I don't like cheesy or sappy, but I do like a nice romantic scene once in awhile.

Well thank goodness I didn't alienate anyone. Including myself. :D

And yes, MissV, I can't give sappy cards either. My whole life we always gave humorous cards to everyone in the family and I continue to do so now.

Oh shoot and I wanted to also say, Beth... I wouldn't touch the bathrooms in Alex's WIP for all the gold in Japan!!! Love ya Alex, but no females?? lol!

Most enjoyable post. Everyone is entiltled to their own opinions so I wouldn't worry about upsetting anyone. We all should be able to take critque.

I despise GENRE romance because I hate the idea no person is 'complete' without some other 'half' and know romance solves nothing. I TOTALLY agree with you though, on romance as a subplot, or side piece--to add a nice little piece of happiness or hope to an otherwise dark tale.

I seem to use sexual tension a fair amount--people thrown together and resisting it--but it is always a side thing. None of the books I've written have 'nothing' romantic but that is just because I think in life, people have attractions and interests--sometimes they go well, sometimes they create all sorts of problems. But characters without those feelings (or an active resisting of those feelings for whatever reason) fall flat--they don't seem realistic.

I try to write the way life is. My life has some squishy parts, though I do NOT go into any graphic detail in my writing. That's just, shall we say, Ewww? (this from an unabashed mother of 5!!) I just believe in respecting my characters' right to privacy during intimate moments. That's why bedroom doors have locks, right?

But I do not write romance books, where the plot is essentially the squisy love tangle. There's got to be something else going on, just as there is in life. I love my hubby dearly, but my life has a PLOT, dang it! ;)

I think a 'splattering' of romance is essential. At least in my books. I don't know about you but it just adds another 'interest' factor in the plot. I love books with a romantic side- no matter the genre

I don't like things to get tooo squishy *shudders* but my books almost always end up with romantic bits. Mostly, because I'm a romantic at the core, I may kill the couple two seconds after they finally get together, but I do want them to get together.