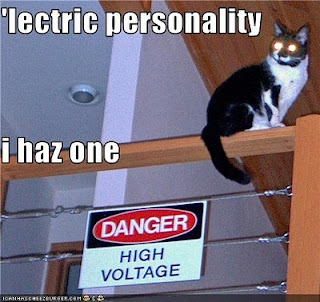 I have been sitting here for some time thinking of my characters and their creation. Every author wants to be able to create a character with personality, charm, an overall presence that just leaps off the page. Or perhaps subtly slips into the readers heart on little cat feet.

I think I am not being egotistical when I say that my characters are charming. At the very least, they are entertaining. They are not flat, boring people. I've known some real life people like that. But that is another story. However, I've also known some real characters in my life.

I had yet another discussion with someone about the "Twilight" series and while the person enjoyed the books, they also agreed with me that the ending of the entire story seemed to just fall apart. *Insert group of Vamps shrugging and saying, "Yeah, you win. But we're watching you! You won't be able to sip soup without us knowing..."* Anyway, I do have to give Miss Meyers kudos in one department.

What can I say? I mean... Edward is totally not my type. But Jacob? Oh, yeah. But some women are drawn to the Edward types. If I were to fall in love with someone else's fictional character, it would totally be Jacob. I have known authors who have fallen in love with their own characters. Again... another story.

I love my characters. Each one is special, unique and quite entertaining. Their wit and sarcasm astound me, but then again they do get that from me. Wow. That sounds a lot like bragging, but it isn't. I can be funny, yes, but not nearly as funny as the voices in my head. My assassin is dark and sarcastic. She's got a morbid sense of humor. My Alabassin, he's a doll. Honorable young man that he is, he'd duel any man who would dare to insult those he loves. Vendras, well he is just my comic relief, that boy. Bit of a gambling addiction as well. But, everyone has their flaws, even in fiction. Trinara tends to be a bit of a ... well, I do not exactly know how to put it politely that she LOVES men. A lot and often. There, I suppose that is a good way of putting it nicely. She just hasn't found the right one and has sort of deemed all men are just playthings and leaves it at that. Or at least that is what she thinks. Boy, does she have a rude awakening... Ha!

So what about your characters? It's okay to brag. They're like your kids, you created them, take the credit for their presence. Do you have dynamic characters people will just fall in love with?
Posted by Mel Chesley at 7:00 AM

I like my characters. I wouldn't have rewritten CassaStar if the characters hadn't been so compelling.

I think so far my characters have more or less the traditional fantasy feel (with the exception of one, maybe.) I think some reading outside the genre will help me with this.

I guess all writers like their character to a degree.

One of the characters, however, who is not the star by any stretch of the imagination, is my favourite. He's deliciously annoying.