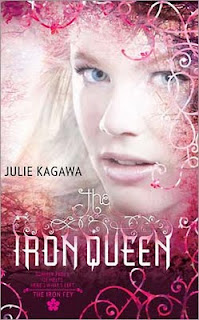 Now don't judge me. I didn't know this was a Teen Harlequin til after I bought the book and had gotten myself hooked.

Yeah, I know I don't like romance. But you know what? This book was about more than romance. I'm a sucker for a good story as well as an even bigger sucker for faeries. Yeah, I love me some faeries.

I have to say that I absolutely LOVED this book. Why? Well, let me tell you! Here is the synopsis:

In less than twenty-four hours I'll be seventeen.

Although, technically, I won't actually be turning seventeen. I've been in the Nevernever too long. When you're in Faery, you don't age. So while a year has passed in the real world, agewise I'm probably only a few days older than when I went in.

In real life, I've changed so much I don't even recognize myself.

MY NAME IS MEGAN CHASE.

I thought it was over. That my time with the fey, the impossible choices I had to make, the sacrifices of those I loved, was behind me. But a storm is approaching, an army of Iron fey that will drag me back, kicking and screaming. Drag me away from the banished prince who's sworn to stand by my side. Drag me into the core of conflict so powerful, I'm not sure anyone can survive it.

THIS TIME, THERE WILL BE NO TURNING BACK.

I got sucked in right away. The back of the book more often than not will disappoint me. I usually feel like I got ripped off or something after reading the back of the book and finding the book nothing like what is written on the back. That is not the case with The Iron Queen. First of all, I haven't read the previous books in the series. I picked up this book simply drawn by the title, cover and synopsis on the back. Like I said, I got so involved with it right away that I didn't notice which one in the series it was, that it was even part of a series or that it was a Teen Harlequin. Once I found out it was a TH, I thought... hmm... do I really want to read this?

So, while reading this book, I didn't feel lost like I normally do in a series of books I pick up in the middle. I was able to continue reading and get a general idea of things that had happened in the past books. Overall I was well informed. The story was so awesome! I don't know how else to describe it. It was a very good read and most importantly (for ME) the romance was kept to a smouldering minimum. Yes, there was romance. Yes there was a bit of a love triangle. But it didn't over power the story to the point where I wanted to throw it through a window and choke girls wearing "Team Whoever" shirts. The fey involved with the half breed were actually mature. The girl, Meghan, also seemed mature, but not overly much. She still seemed to be a teenager, but had matured and grown due to all she had been through. All I can say is read the book or even recommend it to a teen. I'll be suggesting it to my niece. The whole series as a matter of fact!

Sorry guys, I hate when I copy and paste something and it makes my font all wonky....

Don't you love it when books surprise you, though? I mean, really. It shatters preconceptions, and I think we all need that every once and awhile. :)

Sounds like a great book. I will have to add it to my must read list. Thanks for stopping by!!

@ Elizabeth: yes I love being surprised by books!

@Dafeenah: Would be worth it for sure. And thank you for dropping by as well! Good to meet new people.

This series has been on my list to check out for a while but now I'll make a point to actually read these books. Thank you for the review and thank you for visiting my blog. You've got a new follower!
Olga at Bibliophile's Corner

I was wondering if you ever thought of changing the page
layout of your blog? Its very well written; I love what youve
got to say. But maybe you could a little more in the way of content so people could
connect with it better. Youve got an awful lot of text for only having 1 or two pictures.