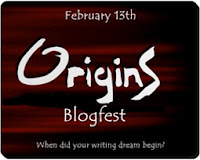 Since I missed out on IWSG, I decided to join this one at the last minute!

Origins Blogfest is where we tell about how we got started in writing. You can see the list here.

Everyone has a unique story, a moment when they said, "Hey! I'm gonna be a writer!"

I just started writing stories when I was in high school. The first thing I wrote creatively was a journal entry for my English Lit class. The topic was "Describe a Forest Fire". So I did, from the perspective of the animals. I think this was when I was a Junior and up until that point, I wasn't impressing anyone with my mad English skills.

I failed English in high school every year. No joke.

I just didn't apply myself, plus lots of other reasons. There are times when I wish I could do high school over, without all the drama and teenage angst.

After the reaction I got from the teacher after that first burst of inspiration, it gave me a little boost. But I didn't write anything until my last Senior year (yes, I was on the 6 year plan...) when we were asked to write a Fable. We were all given the moral and had to write the story based upon that. Right about that time is when I was reading more fantasy and playing Dungeons and Dragons.

My fable knocked my teachers socks off and she actually approached me after class and said I had potential.

I was a struggling teenager. At that moment in time, I was working to help pay the bills and my mom had just gotten out of the hospital and was back on her feet work wise. I dropped out for a semester of school to work full time and decided I wanted my diploma, not my GED. How was I going to even go about writing stories? I wasn't even sure if I was going to go to college.

But the one thing my teacher told me was to just give it a shot and see what happened. I think that was the moment I let the floodgates of my imagination fly open. This woman had more faith in me and my skills and saw a talent. I don't think I would have ever pursued writing if it hadn't been for her. She knew I understood English and grammar, she could see it in my writing even if it didn't reflect in my grades.

From that moment, I began to write stories for my D & D character. Yep, Kayta. I jotted down little stories here and there and things progressed. By the time I was 22, I had a whole story. Horrible as hell, but a story nonetheless. But then it got put on hold until things in my life returned to a semblance of normal.

Two kids and two bad marriages dampens the writing spirit of some people (not my kids, the marriages) and I didn't pick up writing seriously again until I met Larry. He is the reason for my success. He's my support. I wrote short stories for my characters while playing Legends of Cosrin and had lots of people tell me I should write for a living, but I just blew it off. However, every time someone commented like that about a post, it gave me a thrill. I gobbled up those comments like a starving animal. Because I WAS emotionally starving. I was getting attention.

But that isn't what made me want to pursue writing as a career. I have a story to tell and I want it to be told. Now, I'm getting that opportunity and I have worked hard to polish my craft and hone my skills as a writer. I labor over every sentence and feel I have come a very long way from that first story I wrote way back when, describing the forest fire from the viewpoint of the animals. And much like everything else I do, I'm pretty much self taught.

Thanks to all the hosts of this blogfest! Again, you can see the list here of who is participating!
Posted by Mel Chesley at 2:39 PM

I didn't mention, but my 9th grade teacher encouraged me to pursue writing and I've never forgotten that.

And my D&D character was warrior Taarna. (From the movie Heavy Metal.)

That's awesome! I have a guy that owns a coffee shop up here with that red sword tattoo on his neck. And teachers, some of them, I wonder if they have any idea of what they inspire in their students sometimes?

Enjoyed your post--and your blog! I'll be back!

I'm so thrilled as a teacher to read all the origins that had an encouraging teacher behind them.
Glad you had the strength of character to stick with it.

Your determination is inspiring. Thank you for sharing this. I'm so glad you got on board at the last minute. This has been a great fest and every single story has been a wonder to read.

I really enjoyed reading your "origins" tale and also perusing your blog. I never played D & D, but I always wanted to, as I simply love fantasy! Love the pics of Alaska, but brrrrr! You have a new follower (me!). :)

Hi, am following now, nice to meet you.

Writers need tenacity, and it sounds like you have it. You just had to wait for the right time.

It's a good teacher that can see potential and help a student tap into it.

Good for Larry! I never wrote specific stories for my D&D character, but I did create several campaigns.
Thanks for participating in the blogfest!

I had a 9th grade teacher that was an integral part of my decision to be a writers also. Great origins story.

Laboring over every sentence is what its all about! There are people who call themselves writers that don't seem to get that. Good for you in getting to where you are now and best of luck with your future projects. You told a great ORIGIN story! :)

You're lucky to have had a teacher like that. :)
Great to meet you on this blogfest.