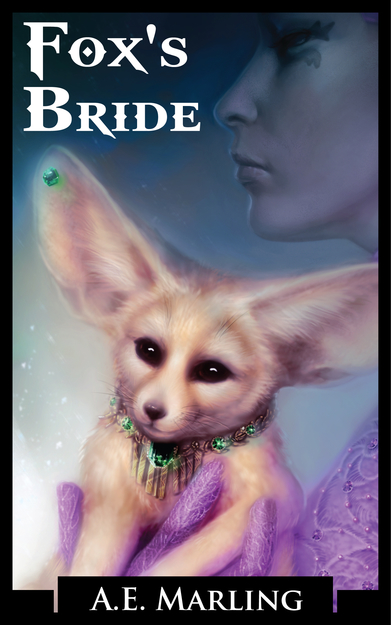 A desert fox. An enchantress. And a sacrificial marriage.

Everyone in Oasis City worships the fennec fox as a sacred animal, except for the one woman forced to marry him. Enchantress Hiresha believes her fiancé is possessed by nothing more divine than fleas, and she also objects to the wedding venue: the afterlife. Priests will trap her in an airless sarcophagus with the fox. She has only four days of engagement left to live.

Her escape attempt ends in disaster, leaving her at the mercy of the city's vizier as well as her own pathological sleepiness. She wishes she could trust help from the Lord of the Feast, a past acquaintance with forbidden magic. He warns her that a sorcerer with even fewer scruples than himself may have arranged her marriage, to murder her. To find the truth before it's too late for her and the fox, she must slip off her silk gloves and break into pyramid tombs.

A. E. Marling and Hiresha continue to capture my heart! The stories I have read by this author (this book and 'Brood of Bones') keep me coming back for more. Marling's writing is clean, well defined and cut as exquisitely as any of Hiresha's best gems.

When Hiresha arrives in Oasis City, she thinks her time spent there will be a bore as everyone scampers to do the fennec's bidding, believing that it is possessed by one of their gods known as 'The Golden Scoundrel'. But when the furry little avatar circles her feet three times, everyone is delighted that he has chosen his bride! While the details are a bit fuzzy, (no pun intended) Hiresha is certain she does not want to marry a fox.

While we get to meet some new faces, a few old ones return as well. Hiresha's maid, Janny and the dark one himself, the Lord of the Feast, Tethiel.

This time, the Lord of the Feast is not as prominent and the story focuses more on Hiresha and her Spellsword, Chandur. Because Hiresha does not want to rely on Tethiel as much as she did before, she discovers some new strengths of her own. Going against the wishes of the priest's, Hiresha makes her choice: Save the city or asphyxiate with a furry spouse.

Once again, Marling captivated me and Hiresha charmed me. I have to give this book a 5 star review.

Five out of five skull and crossbones.
Posted by Mel Chesley at 7:00 AM

Forced to marry a fox? That sucks.

But look at those ears! That face! It's sooo cute!! Okay, no I wouldn't want to marry a fox either. :D