Hey everyone! I'd like you all to give a very warm welcome to E. B. Black, author of 'Medusa's Desire'. Rather, give a great big welcome to Stheno, Medusa's sister. She's got some interesting stuff to share:

I know a lot of people hate their siblings, but I have the worst sister in existence.

My name is Stheno and you've probably never heard of me, even though you've heard of my sister,
Medusa. I'm a gorgon, too, and unlike her, I'm immortal.

No one cares though because it's always been about Medusa all the time. Back when we were human,
she was so pretty that Poseidon was even attracted to her. While me and my other sister, Euryale, went
unnoticed and unmarried.

It's her fault our family was turned into monsters! She blasphemed Athena, but no one cares about us
and what we are going through. The minstrels all sing tales of the gorgon, Medusa, without mentioning
us sometimes.

It's really hard to get a date when you turn every creature you look at into stone. Finally, I thought we
were even with our sister, but she found a boyfriend anyway! She's flying around the world with him.

Did you know that I created vampires? I live in the underworld and my blood has the power to give any
creature life. Some of my blood landed on spirits and they grew skin! It was so flaky and thin, though,
that they burst into flames when they went out in the sun. I've kept them alive by feeding them more
blood and now they crave it! I know humans enjoy tales of vampires, so why aren't there thousands of
them here to thank me?

Instead, there are stories being written about Medusa and statues being built of her. It makes me gag!

Not only that, but this author named E.B. Black wrote a romance novel about Medusa called Medusa's
Desire. I'm obviously the more interesting character, but whatever.

In her story, Medusa is the heroine instead of the villain. When Perseus comes to chop off her head, he
falls in love instead. They struggle to have a relationship because they can never gaze into each other's
eyes. Not to mention that the gods are after the two of them since Perseus specifically disobeyed
something they asked him to do.

How ridiculous is that? This author feels sorry for my sister and says that's why she wrote this story.
Pardon me while I roll my eyes. 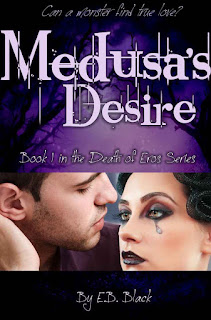 If you'd like to learn more about E. B. Black and 'Medusa's Desire', please check out the links below. Thanks, Stheno, for sharing this bit of mythological history!

Where to buy 'Medusa's Desire': http://www.amazon.com/Medusas-Desire-Death-Series-ebook/dp/B00ABMAW5K/
Posted by Mel Chesley at 7:00 AM

Hi Mel, Hi E. B., funny sister with attitude. Love the idea though I wonder how they get around all those snakes. A reason to read, right?
Nancy

That's an amazing concept! Stheno is funny as well. Hope she gets a story too. :-)

Sounds like an interesting premise for a story. I love mythology.