I am blessed to have lots and lots of author friends. I'm especially thankful that every book donated to my giveaway is from a fellow Word Weaver! So many, many thanks to Jenna Miller, Anita Dawn Stewart, Mary McDonald, Walki Tinkanesh and Hydra Star! Let's kick off this awesome week, shall we?

Spreading the word about a book is one of THE BEST advertisements. Reviews rank right up there and I've gotten a couple of good ones so far! So what now? Well, I'm glad you asked... three lucky people will win a free ebook copy of my book, Adversarius! But that's not all! You'll also get to choose from these fabulous books as well from some amazing authors. Check out the list, then we'll get to to the rules.

Ceremony of Chaos by Jennifer L. Miller ~ Ceremony of Chaos features 12 Short Stories from the twisted mind of Jennifer L. Miller. Within the pages you will find supernatural and real world horrors sure to keep you up at night. With one new tale of terror, Black Widow, Ceremony of Chaos also contains short stories penned for Darkened Horizons Magazine, such as The Shewolf and Slither, as well as Black Water City from the Horror Anthology Concrete Blood: Dark Tales of the City. Short Stories that appeared in several Word Weavers Anthologies also are included in this collection. 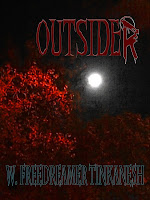 Outsider by W. Freedreamer Tinkanesh ~
Rooted in the music scene of London, UK, and inspired by a life-long passion for music and a peculiar interest in private dark sides, 'Outsider' is a study of human emotions, disturbed by vampires and punctuated with rock music. Sid is a medicated musician who has lost her rhythm, but strangely is finding her voice as a writer.For Joy, the bored blood-drinker, it might have started when a powerful vampire turned her into a creature of the night at the dawn of the 20th century. Is everything as it seems? Is everyone as they appear? With offbeat sense of humour and twisted realism, the author guides you down a trail of bodies (alive, dead and undead) until the final showdown.

No One Makes It Out Alive by Hydra M. Star ~
"No One Makes It out Alive: and end of the world anthology" is in short a collection of writings about the end of the world. The genres and subject matter of these stories stretches from zombies to nuclear war and from comedy to erotica, with mostly everything else covered in-between. This anthology was edited by writer, columnist, book reviewer, and magazine owner Hydra M. Star. Cover art provided by Dave Lipscomb. Foreword by Garth von Buchholz. Includes stories from; Andrea Dean van Scoyoc, Joseph DeRepentigny, Josephine Seven, Ken Knight, Larry Lefkowitz, Magan Rodriguez, Tibbie X, and W. Freedreamer Tinkanesh.

Black Pyramid by Anita Dawn Stewart ~
A beautiful land enriched with a history of mythical Gods and power hungry pharaohs. There is ONE who walks among us. He knows the truth of the Ancient Egyptians....   Siaak hides the reality of an era long erased from the temples and obelisks in order to keep the world safe. For there lurks an evil waiting to regain control of Egypt and rule the entire world!   Archeologist, Melissa Ambers, can't resist the offer to excavate a newly discovered pyramid. Only this one isn’t just any pyramid. It’s the mysterious, Black Pyramid! She finds out there's more to the stone monument than meets the eye. And within hours of stepping inside the dark tomb, Melissa's on the war path with Siaak. An ancient being who will stop at nothing to keep the leader of the BloodSeekers imprisoned. Even if it means killing Melissa and all who seek the knowledge of, the Ancient Breeds!

No Good Deed by M. P. McDonald ~ Mark Taylor discovers first hand that no good deed goes unpunished when the old camera he found during a freelance job in an Afghanistan bazaar gives him more than great photos. It triggers dreams of disasters. Tragedies that happen exactly as he envisions them. He learns that not only can he see the future, he can change it. Then the unthinkable happened and everyone ignored his frantic warnings. Thousands die. Suddenly, the Feds are pounding on his door and the name they have for Taylor isn't urban hero. It's enemy combatant. And, it means they can do anything they want to him. Anything at all.


On December 17th, I will choose three winners.

First place will win: A copy of Adversarius PLUS three other books of your choice from the books shown here.

Second and Third place will win: A copy of Adversarius PLUS two other books, again, your choice.

Now here is how you can win. Since this is all about Spreading the Word, take a look at the list of how to gain entries:


a Rafflecopter giveaway
Posted by Mel Chesley at 7:00 AM

And I will help spread the word for you on Wednesday!

Thanks Alex! And as usual, you are first to comment. I love that about you, you Ninja! Have fun reading the blogs about you today. ;)

The word has been spread :) Good selection of books you've got too :)

Thanks Jamie! On both counts. These are some talented ladies I have the honor of sharing the spotlight with. :D

All of the books look great. I agree about spreading the word. I probably wouldn't have heard of any of these without your post.

She's a very good writer, Elsie. I don't say that because she's a friend, either. She's got talent! Good luck!