Hey everyone! You all got a chance to meet Dave Ferraro, author of "Dark Genesis", a YA paranormal fantasy, in my interview on Wednesday. Now here is Dave again. His book is now available on both Amazon and Barnes & Noble as well as Smashwords. He's having a contest over at his blog where you can receive a coupon code for a free copy of his book as well as enter into a drawing to win a $40 gift card from either Amazon or B&N, your choice.

So here is some more about Dave and his book: 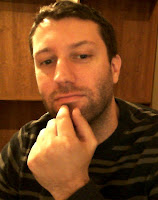 Dave Ferraro grew up in Brooklyn Park, Minnesota, where he was warped by a steady diet of
comic books, horror movies and young adult novels. He is the author of the paranormal fantasy
series "Hunters of the Dark," as well as the gay teen paranormal romance "Twice Bitten." He graduated
with a B.A. in English and creative writing from Saint Cloud State University, and currently resides in
Milwaukee, Wisconsin.

Alyssa opened her eyes to darkness. And in the first flash of light provided by a gathering storm, she
could make out a ring of bodies surrounding her.

With no memory of who she is, Alyssa stumbles into a dark world populated by witches. The witches
are powerful, and demonstrate frightening powers, but even more terrifying are the monsters who rule

over the land. Vampires, werewolves and other awful creatures of the night have taken over, forcing
the witches behind stone walls, afraid to venture outdoors. But Alyssa finds that as she kills certain
monsters, memories return to her, memories of a life on Earth, and the boy she left behind.

The quest to collect her memories and piece together the puzzle of what has happened to her is a
daunting one, with betrayals and sacrifices every step of the way. But Alyssa is determined to fight for
a world that is not her own, destroying powerful monsters along the way, so that she can return home to
the boy she is coming to love through the memories she recollects.

The rest of the coven had gathered around the courtyard. Just minutes earlier, they had chanted

and used spells to make their limbs faster, improve their endurance, enhance their might, and hasten

their reflexes. Alyssa, of course, felt none of this. The others, however, seemed flushed and ready for

battle, newly painted runes exposed on their arms to guide them safely back home.

“Good luck to you, brave souls,” Octavius said, bowing to them as the gate opened.

Alyssa licked her lips and prayed to god that she was right about the silver. She shifted her two

long knives in her hands, nine inches long and deadly sharp, marveling at how natural they felt in her

hands, like they belonged there. They made her feel more confident, even though, for all she knew,

she’d never lifted a knife in all her life.

She led the troop out of the gate, walking cautiously, her eyes darting left and right, watching

for any sign of the wolves. And while she knew that they were out there, they didn’t present

men and women who had followed her. “They are likely waiting for us in the forest,” she said. “They

think to ambush us and destroy us with one mighty swoop, but they have yet to taste their poison.”

She lifted one of her knives high into the air and everyone looked at it, as if it were holy. She smiled

confidently at them and turned back toward the forest, and began to march them toward a battle for

“Very inspiring,” Parker sidled up to her.

“Mmm. Very much so. I’ll have to add brazen confidence to your list of uncanny qualities.”

“You do that,” Alyssa said, unable to keep a smile off of her face.

“You feel responsible for this,” Parker said in a low voice, glancing back to ensure that a good

distance was between them and the others. “Is that why you lead them like this?”

“Why should I feel responsible?” Alyssa asked. “Someone needed to step up, and nobody else

seemed likely to do it.”

“Really?” Parker frowned. “Because both you and I know that one of the girls is the spy.”

Alyssa flinched at the word, earning a grin from Parker.

“And you let them walk past that barrier unscathed,” Parker continued.

Scoffing, Alyssa turned to him with a sneer. “Why would I do that? I’m putting my life on the

line here too, you know.”

“Oh, I know,” he assured her. “It wasn’t intentional, I’m sure. But we both know what you

can do. Negate magic. When you passed over that barrier of salt, you sucked the magic right of it,

allowing for your comrades to step over it, whatever intentions they had for Haven.”

Alyssa’s eyes widened, and she nearly came to a stop, but Parker nudged her forward. “Don’t

fret over it. What’s done is done. And you’re about to rectify your foolishness.”

“I didn’t mean…” She let her voice trail off as she turned his words over in her head. He was

probably right. It probably had been her doing that had allowed for the traitor to strike. She had given

them the opportunity they’d needed to bring down the entire village. She’d been so careless. How

could she not have thought about the consequences? How could her very presence put so many people

“Hey, come on,” Parker elbowed her gently. “We need your head in the game here. You’re

going to lead us to victory here.”

Alyssa nodded and turned to look back at the people following them, so trusting, like lambs to

the slaughter. She glanced over at Parker, who read the horror on her face.

She looked into his eyes, deep brown wells of warmth, and suddenly felt a calm come over her.

He was right. What had happened had happened. But she could do this. And she would see it through,

one way or another.

Awesome! Now don't forget to head on over to his blog and enter to win!
Posted by Mel Chesley at 7:00 AM

The premise sounds great and I liked the excerpt. Best of luck to Dave!

I think that is an awesome giveaway idea. :)