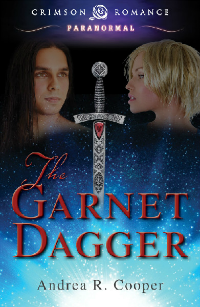 Forbidden to cross the Elvin barrier into human lands, Brock cannot sate his curiosity. Cursed by a vampyre bite that forces him to feed on the life-essence of others, he is unable to touch another without taking their life. Chained by prophesy, he must find a witch, pierce her heart, and draw her blood for his cure.
Celeste must escape the monks who have held her prisoner for years. Her magic has been kept dormant by her captors. An ancient powerful Warloc craves her powers. If he succeeds in devouring her magic, she and the world will die.
When Brock falls in love with Celeste before realizing her demise is his cure, will love triumph over his desire to be healed? Will he risk everything to save her from a Warloc, an oath breaker, who also wants her dead?

Okay, first of all, this is a cool concept. I would never have thought about an Elf being turned into a Vampyre. Second, the way this vampyre kills is just downright awesome. Completely off the mainstream beaten path.
Andrea Cooper paints a very vivid world in "The Garnet Dagger". Her characters, Brock and Celeste, are very well developed.
Brock is a typical, curious Elf. Sadly, it is his curiosity that gets him in trouble. But he is willing to do what he must to fix his mistake.
Celeste is a very strong-willed girl. She doesn't take no for an answer, which is good. Seems like Brock needs someone like that in his life. They are the epitome of Yin and Yang.
The book has some errors, nothing major. The writing style is a little different than what I am used to, but Andrea keeps you in the story at all times.
So what am I rating this book? I give it: