My Hobbies When I'm Not Writing...

Most of you know I'm a creative person. I don't have just ONE thing that I do.

Sometimes, dear Lord, I wish there was just ONE thing.

Sadly, that's not the way it goes. Or should that be happily? Sometimes, it's both.

But there is a LOT to my crafting. I mean a lot... I don't just have a craft room, I have a craft house. When I have a house that is!

So here are a few things I do that I'm pretty dang proud of:

I looooove polymer clay. I've gotten to the point where I use white, and paint it myself. I feel it allows me more creative expression.

I discovered a joy for painting, even though I don't think I'm very good at it. But I am learning quite a bit. Dot painting is my favorite, so far. 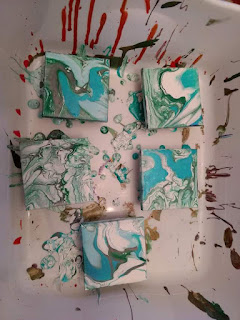 I watch lots of YouTube tutorials for things. Sometimes, what I watch, inspires much more. 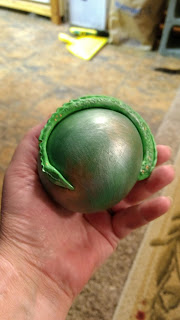 Dragon egg made from plaster of paris and polymer clay.

So what are your hobbies outside of writing?

Posted by Mel Chesley at 7:00 AM No comments:

What To Expect When You're Expecting Breed...

I'm going to attempt to give a little insight into the world of The Breed, today.

This world was designed and created by two friends, Charles and Ray, about 20 years ago. We all know how life can move fast, things get put on the back burner and then, all of a sudden, BOOM!!! You're going, "Hey, whatever happened to all that?"

But what happens when you're not exactly a writer?

That's where I came in. I've known Ray for some time. We were old gaming buddies back when gaming was a MuD. (Legends of Cosrin). Ray and I reconnected on Facebook and I got to talking about my writing. At the time, I was working on Adversarius and had just released Veritas.

I'm going to be honest.  I really felt as if I failed as a writer. Of course I self published after being burned a couple times. But honestly, that was my fault for not researching and taking the time to go through proper channels. Oh, the things I learned. I will be finishing the trilogy soon, but in the meantime, I have found a love for supernatural, paranormal, horror stories. And you know what? I'm pretty dang good at scaring the beejeesus out of people.

Anyway, Ray and I got to talking about his idea and he directed me to Charles. That was five years ago. I have taken the ideas Charles had and I've worked them into decent stories. I began inviting other authors into this world, getting their take on things. We have a pretty solid core group. All in all, about 6 other authors, not including myself.

At the moment, we're sitting on four full length novels, a short story trilogy and at least two screenplays, with three other stories waiting in the wings. Plus, a super special series that will only be available to members who sign up for the newsletter. We have a myriad of artists who will be doing original artwork for covers and work on graphic novels.

I hope this has piqued your interest. I'm on pins and needles, myself.

Questions? Comments? You know I love to hear from you! I also have a board on Pinterest dedicated to BREED. If you'd like to check it out, let me know!

Posted by Mel Chesley at 7:00 AM No comments:

The one thing I hate most about moving, is when all of my creative stuff is packed away. I haven't crafted anything in almost a month, now. My computer is packed away. All I have out is my cute little tablet.

Thank goodness it has a keyboard!! Otherwise, posting would be an autocorrect nightmare.

The other good thing, is I'm able to continue writing. Gotta love having the MS Word app.

I'm getting excited for the release of BREED. I'm still looking for a countdown banner to put up here. In the meantime, I can share the link to the website at the very least!.

One of our authors will be debuting with a series based on the Fae. In August, she'll be releasing her very first self-pubbed MG ghost story. I will host a giveaway at that time, so be sure to check back here often!

Hope you are all having a great Monday and had a good weekend!

BREED Website
Posted by Mel Chesley at 7:00 AM 2 comments:

There are always times when life just moves so fast! It's been over a year since moving to Oregon. Now, we're in the middle of moving once again. My friend, and fellow author, Nancy claims I am her Gypsy friend! I'll take it.

Our move, this time, is local. We're hoping it will be our "forever" home, or very close to it. Right now, we're waiting for inspections to be done and walls to go up.

In the meantime, I've been crafting and packing and working on the house. Writing has taken a back seat, but with crafting stuff packed away, writing is going to take the driver's wheel.

Blogging comes next. Book promotions and getting things ready for the release of The Breed is something that has been ongoing for quite some time. It just hasn't made it here.

In the next few days, I hope to have a countdown banner for The Breed release. At that time, I will share links of the website and the authors and other members of the team helping to get this amazing world out into the light of day.

Or rather, the dark of night.

Hope all is well with you! See you soon!
Posted by Mel Chesley at 4:50 PM 2 comments: