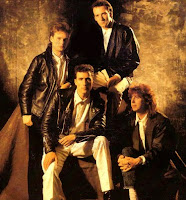 Aun is a Dargorian (Dar gore ee un). I have mentioned her before. She's an amethyst dragon/humanoid. Her powers of speech are telepathic as her sonic scream would rip the flesh off of anyone in range. Even a chuckle hurts people. Onetta rescued her. Aun would have been dragon food if not for Onetta.
Onetta had been brought to Argisindya (Ar giss in dee yuh) as a wee kitten. Kefferlings are Elf Cats. They have fur covering their bodies and have tails, ears and whiskers. But they are humanoid as well. They're very agile and fast. Not all Kefferlings have magical powers, but those that do are trained as any other Mahjii before their magical energies consume them.

Onetta came across Aun when she was young and, as I said, about to be dinner. Dargorians and Dragons do not get along. Most Dargorians feel they have evolved beyond Dragons and are therefore superior, but they're not.

Aun owes Onetta her life and Onetta protects Aun like her own cub. The two communicate very well with each other. Onetta often purrs or mewls, lashes her tail or curls it over her arm as if it is a cape. She can speak like anyone else, but more often than not, her body language speaks volumes. Especially when her tail fluffs. Hehe.

Favorite Band: OMD (Orchestral Manoeuvers in the Dark). Favorite Movie: (The) Order.
Posted by Mel Chesley at 7:00 AM

Most interesting this is a subject I am familiar with, but it made good reading.

Have a great weekend, Mel!

Thanks Yvonne and Talli! Hope you have a great weekend as well. :D

Mel! You're so creative! Wonderful story! :)