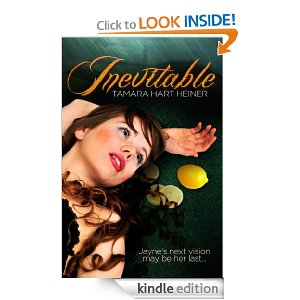 Visions of death plague Jayne, who thinks watching her boyfriend die is the worst that could happen to her. But when she witnesses a murder, Jayne finds herself caught up in a dangerous world of intrigue and suspense.

As it turns out, she is not the only one doing the stalking. The killer is on to her, and all of her visions of the dying don't reveal how her life will end. Somehow, she must stop the murderer before he arranges Jayne's own inevitable death.

Where do I begin? I really, really enjoyed this book. Jayne was a very well rounded character. She had cool parents, but not so cool she never got punished. She skipped a lot of work due to her visions, and lost her job. There were consequences for her actions, which I found very refreshing in a YA novel.

Now, with that out of the way, if I were Jayne and had her visions, which were introduced by the smell of lemons, I'd quickly remove anything linked to lemons from my life. Even the color yellow.

Jayne can see the deaths, or fates, of certain people. Not everyone pops up on her lemon scented radar. She can tell who they are by the aroma surrounding them. All she has to do is make eye contact. Sometimes she can avoid it for awhile, but that is just putting off the, well, inevitable. But when it catches her off guard, if she looks someone in the eye a split second before the scent reaches her, she's caught up in the terrifying vision of that person's demise. So when she sees a young woman murdered, and sees the face of her killer, she doesn't know what to do. If she goes to the police to tell them of these visions, Jayne's afraid she'll end up locked away for being crazy.

Jayne's best friend doesn't learn about Jayne's secret until after Jayne sees a vision of a boy associated to her. But once she knows, she's as supportive as ever, and only miffed for a little bit.

Great cast of characters in this book, great story telling at a perfect pace. Also, very, very clean! Which is a huge plus for a YA book! Kudos to Tamara for her excellent writing skills. I'd recommend this book to parents of teens who don't want their kids reading a lot of cussing or sexual content.

I give this book 5 out of 5 skull and crossbones.

I think she has a book coming out next year with my publisher.

Sweet! I like her writing style and this was a really good book. Can't wait to see what she brings up next. :D