Use the plagiarism checker at Grammarly.com because originality is a terrible thing to waste.

*Please note: This book review is of the entire trilogy. While I don't usually like spoilers in reviews, I may not be able to help myself! On that note, this review will be done a little differently. 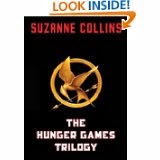 The Hunger Games trilogy takes place in an unspecified future time in the totalitarian nation of Panem. The country consists of the wealthy Capitol located in the Rocky Mountains and twelve (formerly thirteen) poorer districts ruled by the Capitol. The Capitol is lavishly rich and technologically advanced but the twelve districts are in varying states of poverty – the trilogy's narrator and protagonist, Katniss Everdeen, lives in District 12, the poorest region of Panem, formerly known as Appalachia, where people regularly die of starvation. As punishment for a past rebellion against the Capitol wherein twelve of the districts were defeated and the thirteenth supposedly destroyed, one boy and one girl from each of the twelve districts, between the ages of twelve and eighteen, are selected by lottery to participate in the "Hunger Games" on an annual basis. The Games are a televised event with the participants, called "tributes", being forced to fight to the death in a dangerous public arena. The winning tribute and his/her home district is then rewarded with food, and supplies and riches. The purpose of the Hunger Games is to provide entertainment for the Capitol and to serve as a reminder to the Districts of the Capitol's power and lack of remorse.

Where to begin? Well, probably with book one of the series, The Hunger Games. When Katniss hears her little sister's name called to participate in the Hunger Games, she does what any protective, big sister would. She takes her place. This moment is what changes Katniss Everdeen forever. There is no turning back, and survival is crucial. One boy and one girl are chosen from each district to fight in the Games. A fight to the death. There can be only one Victor, and while Katniss is determined it will be her, Peeta changes her mind.

Peeta announces his love for Katniss to the rest of the world. And the two become allies during the Games. So when it comes down to who will live or die, Katniss doesn't think she has it in her to kill Peeta.

I'll try not to spoil it, but if we're moving on to book two, Catching Fire, then you will know Peeta and Katniss both survive the Hunger Games. But this is viewed as an act of defiance by the Capitol. President Snow feels an example must be made of the two of them, to quell any sort of rebellion that Katniss's actions ignite. But everything Snow does, Katniss counters, fanning the flames of rebellion even more. But now Katniss wonders, is she doing this for the right reasons, or is she just a pawn of the Games, still.

Where Katniss is the face of the rebellion, Peeta is the voice. He can turn on the charm and speak in a way that Katniss cannot. So the two of them become an unstoppable force, one worth protecting, if this rebellion is to succeed. Katniss is still torn between Gale, her best friend, and Peeta, but the more she spends time with Peeta, the stronger the bond they share. Until Peeta is captured by Snow and the Capitol.

Book three of the trilogy, Mockingjay, brings us to the climatic conclusion. War is raged, and there are some things that you will never see coming. But, if you get to know Katniss intimately, it really won't be such a surprise. Alliances are made, lines are drawn, and crucial mistakes are made. But in the end... Well, you will just have to read the books.

I loved this trilogy. These books are very well written, very captivating, and, for me, a super quick read because I could. Not. Put. Them. Down. Two nights in a row, I had a "book hangover", but I don't mind. It was well worth it! Suzanne Collins spins an awesome, dystopian, young adult tale. If you don't walk away from these books with a love for the characters, then there's something wrong.

Absolutely five out of five skull and crossbones! I'd give six, if I could.
Posted by Mel Chesley at 11:33 AM

I loved this trilogy also. I had problems with Katniss herself as a character, but the story was very very good and I too, read them one after the other. Nice, thanks for posting! Came over from IWSG...

Very nice to meet you! Thanks for the comment. There were times I kinda wanted to shake Katniss and say it wasn't all about her, but overall, these were awesome books!